ok, so i figured i'd throw up some progress pics, while im bored studying for finals, i've got a few things done lately, added some bumpers, cleaned and painted the trunk and engine compartment, I installed my handmade center caps on the 5 spokes, they don't look as good as they did on the 8 spokes, owell, they will do for now. i cleaned the interior some and greased the seat tracks so i could adjust the seats, axle boots and brake switches should be here friday, so i should be ready to drive as soon as i get them installed and figure out my oil leak problem. I installed a new oil pressure switch, but still seem to have a leak, so I went ahead and ordered a german one. I also have new door rubber, rear bumper guards and a few other items on order from cip1.com, but it usually take 8 or 9 days, i hope to have this thing in good driving shape for the next po boys meet in canton. Anyway, here are the pics, Enjoy! o yea, my garage is nasty and very unorganized, its going to be my next project after I get the oval to driving status. 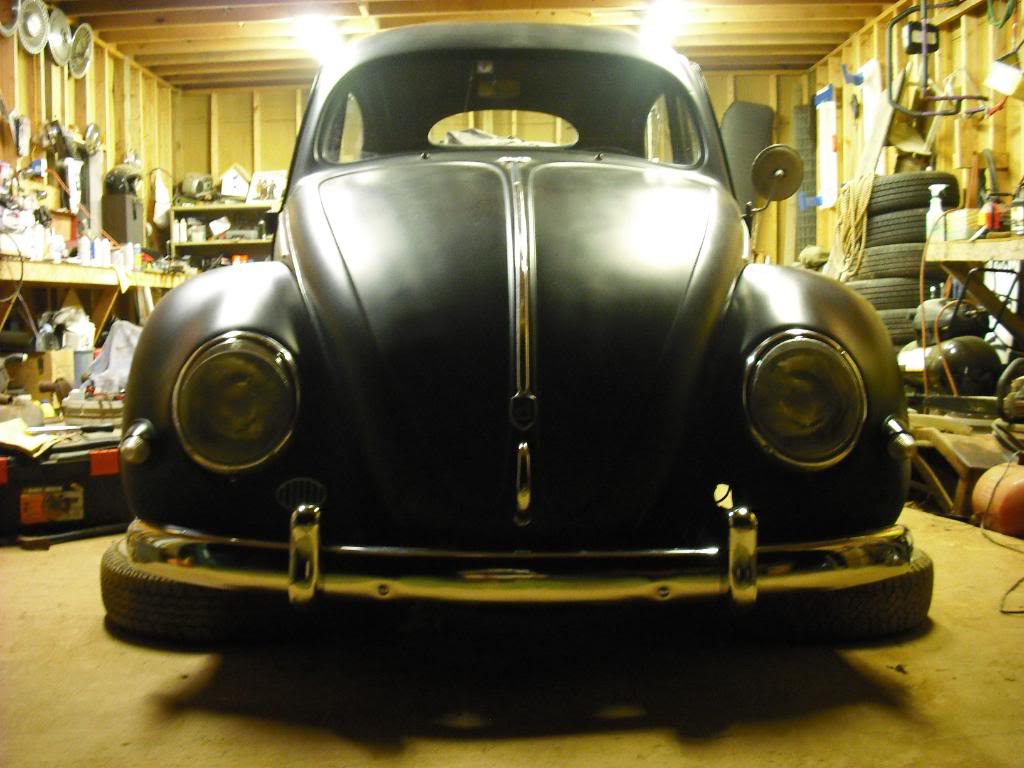 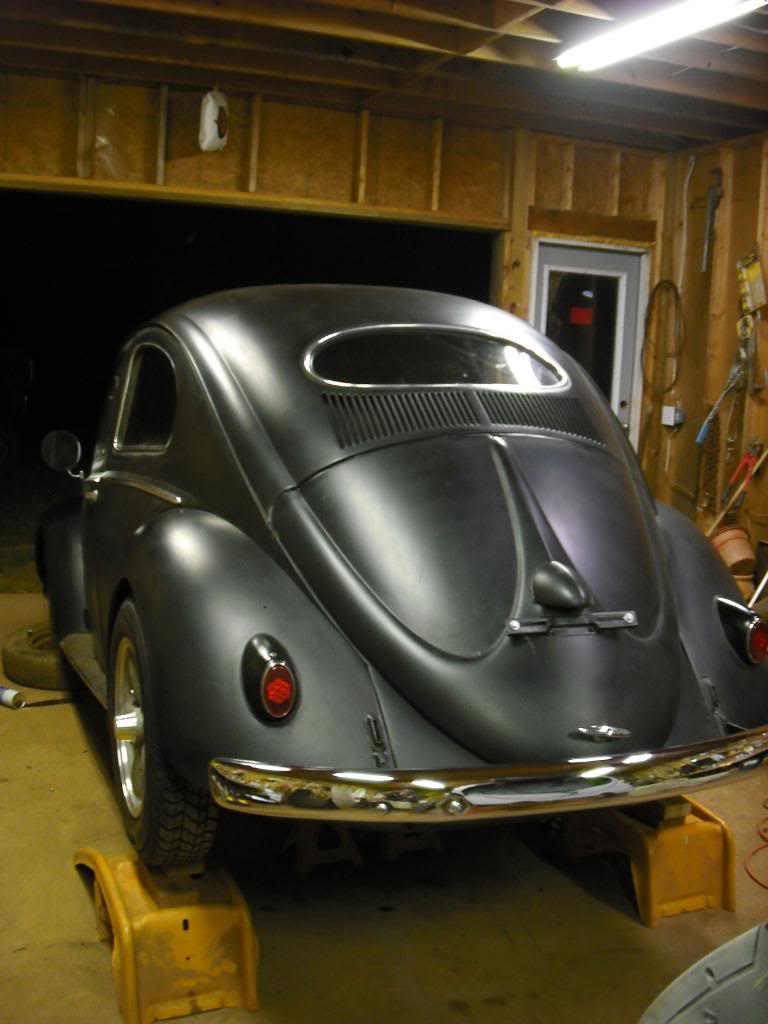 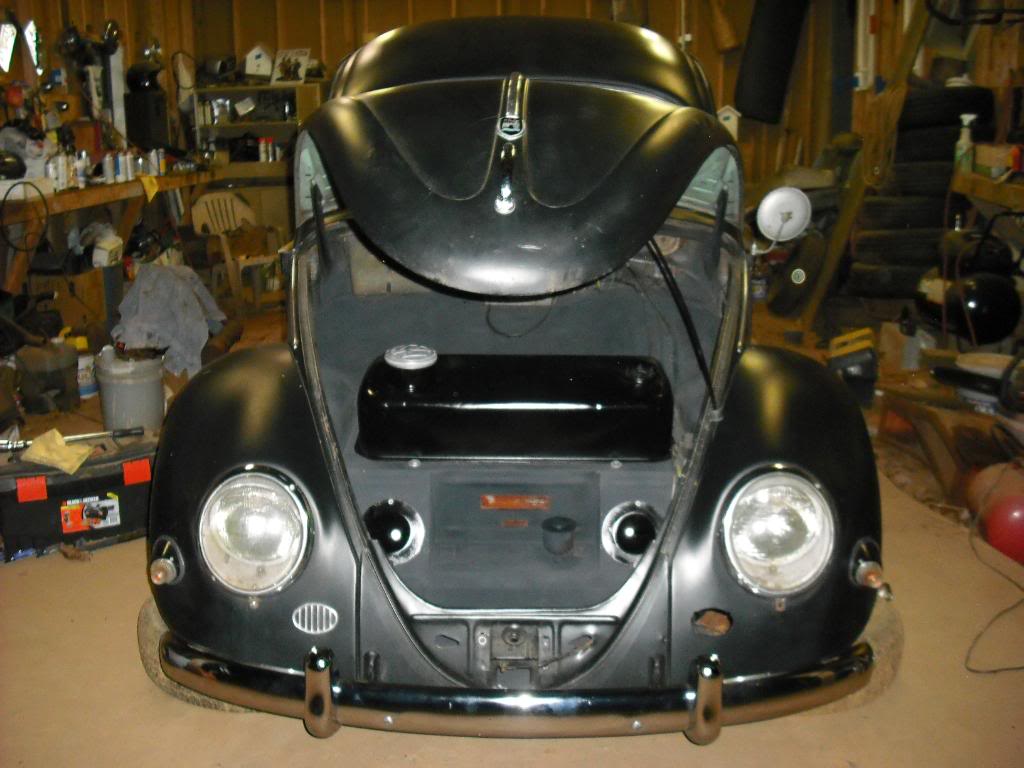 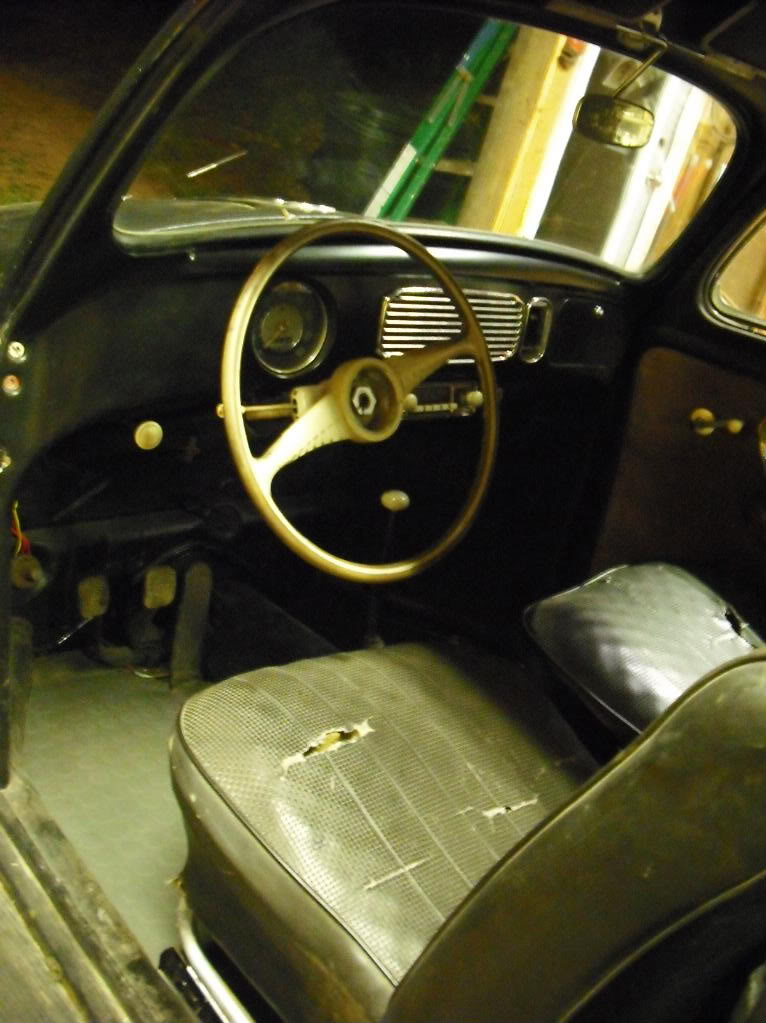 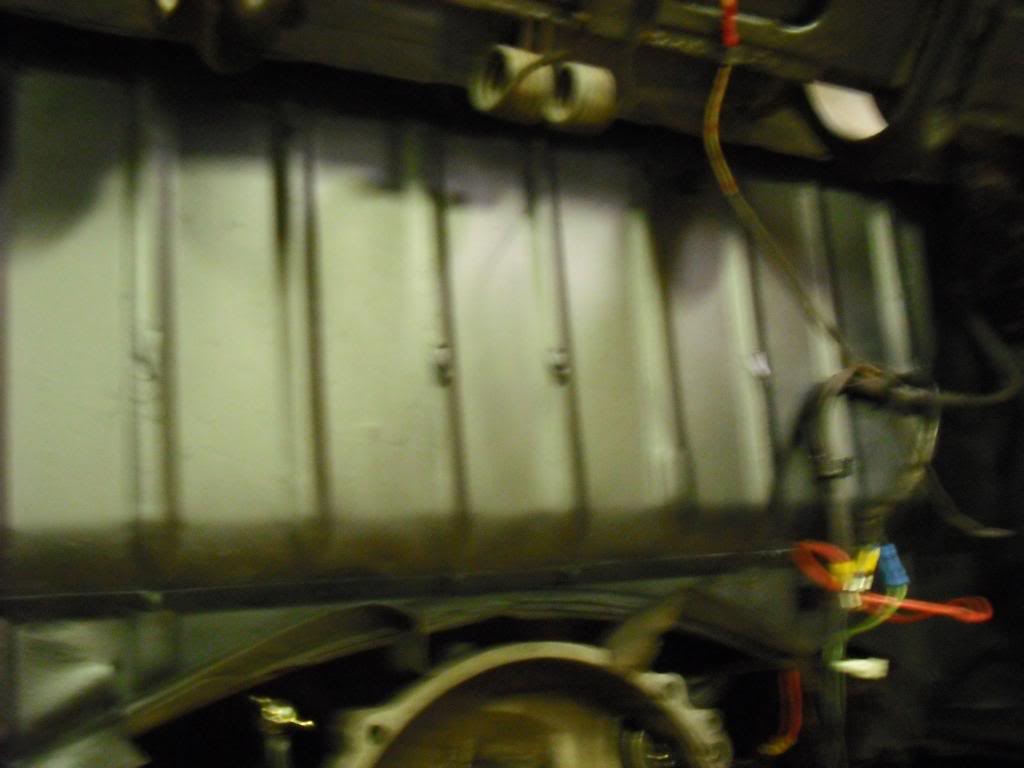 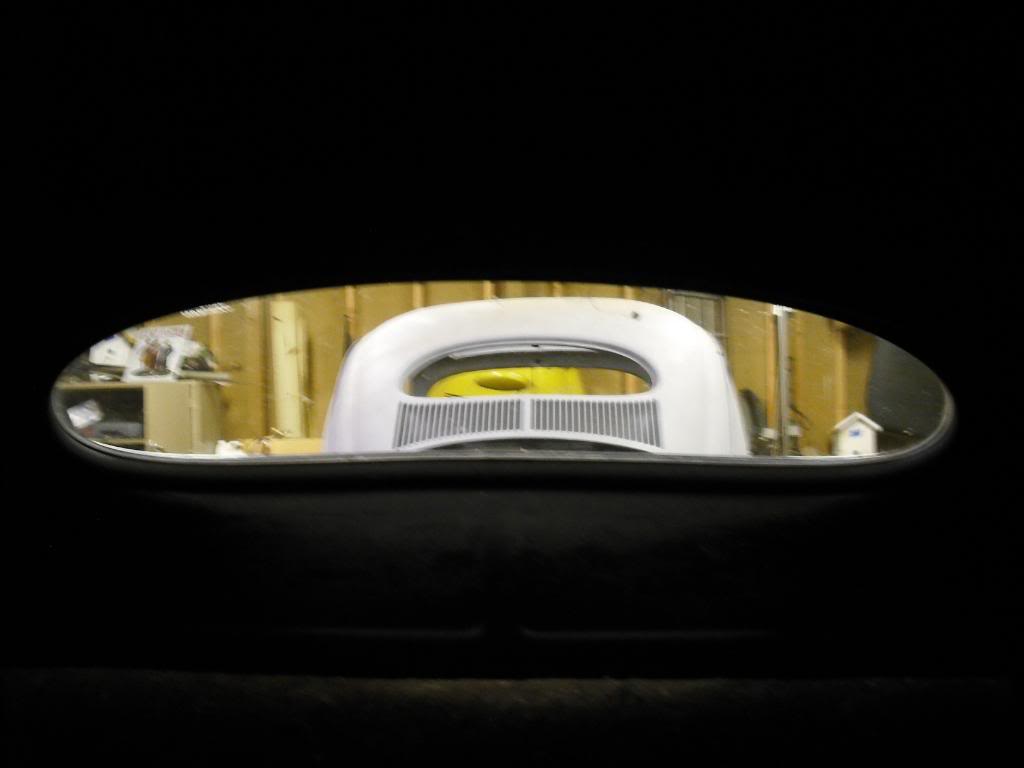 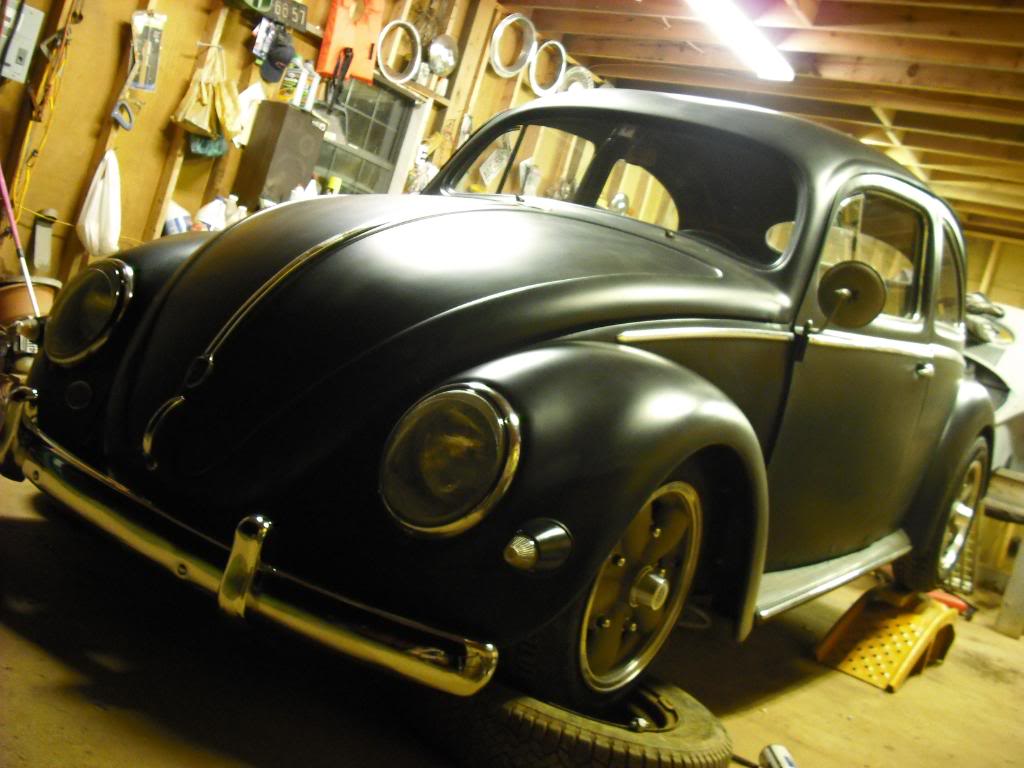 That's lookin' really nice, Michael! Are you going to put overriders on the rear bumper too?

I think I'll be able to make the Po Boys cruise in on the 16th if you want to cruise there together and have two Ovals parked side by side.

57RTOval wrote:That's lookin' really nice, Michael! Are you going to put overriders on the rear bumper too?

I think I'll be able to make the Po Boys cruise in on the 16th if you want to cruise there together and have two Ovals parked side by side.

what, and have yours make mine look bad? lol kidding, but yea that sounds like a good idea, i'll try to get some other guys to come up, im sure Brian will want to come, but right now im just hoping i'll make it, but i have to figure out this oil problem first. yea i have some bumper guards on order for the rear, but im not going to put on overriders since 55s didn't have them.

well, i got under the motor tonight, wiped it clean, turned the flywheel a few times then sat and watched... after a while i noticed a drop forming, i did not see a spot where the oil had ran down so I wiped it again, sat and watched. shortly i noticed a little puddle forming on the bottom of the block, again not seeing any sources of oil running down the block. I have now come to the conclusion that the motor is leaking through the split in the case. not good!

Reverse Osmosis. Mine leaks through the microscopic pores in the metal.

My 1600 was doing that and the case nuts were loose! 3/4 turn and retorqued later, no leaky leaky.
Good luck,
KC

well, i tried tightening the bolts (just in case), with no prevail, but i did install some new axle boots that rid the oval of one leak. I also installed some new brake light switches, i now have working brake lights.

59 Euro Rag wrote:well, i tried tightening the bolts (just in case), with no prevail, but i did install some new axle boots that rid the oval of one leak. I also installed some new brake light switches, i now have working brake lights.

Any progress is good!

another failure tonight... seemed like everything was going well, I should have known, all my parts came, got the engine in and running, put on the bumper guards, even cleaned it a little. so it was a success, time to celebrate... drove it a few miles to a local restaurant, had a great quesodillia, and headed out to a buddy's house, about five miles later i stopped at a red light, and it quit. i rolled into a parking lot. im thinking it is a vapor lock problem such as the gas line getting too hot and not letting it flow.. it wouldn't start, so i reran the gas line. still wouldn't start. about 30 mins later i tried to start it and it started i drove it home. also found that i still have a oil leak from the filler. and seems to be smoking, i cant really tell cuz its dark, plenty to do tomorrow!

im still working out the kinks, but i think its to driving status... 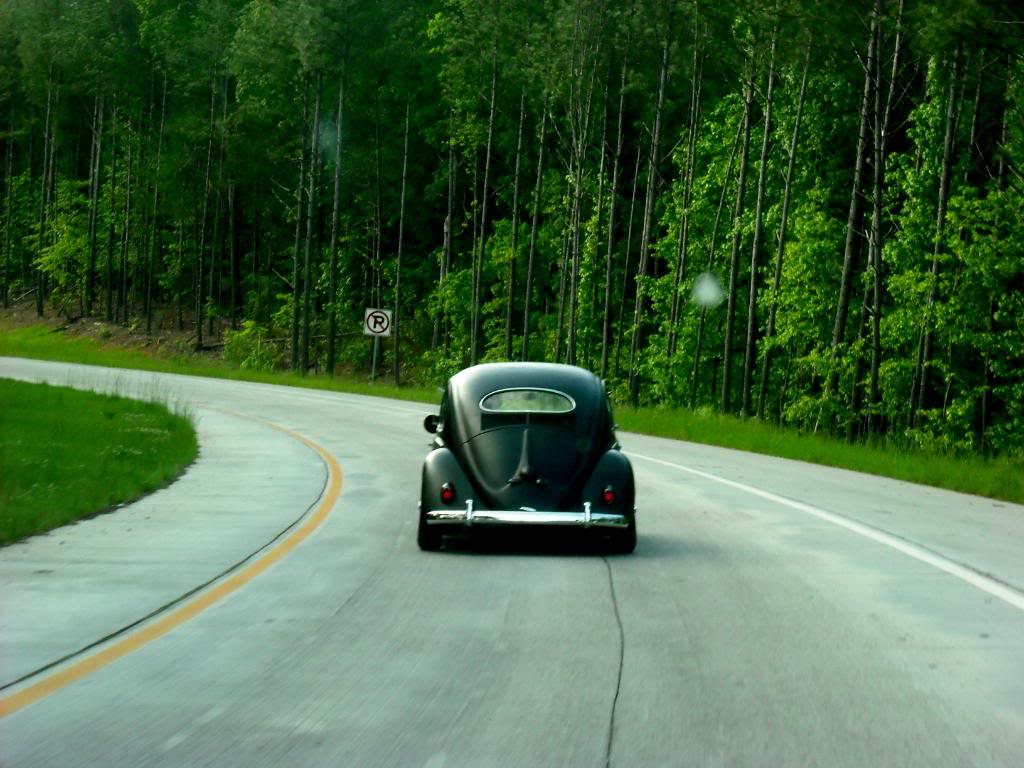 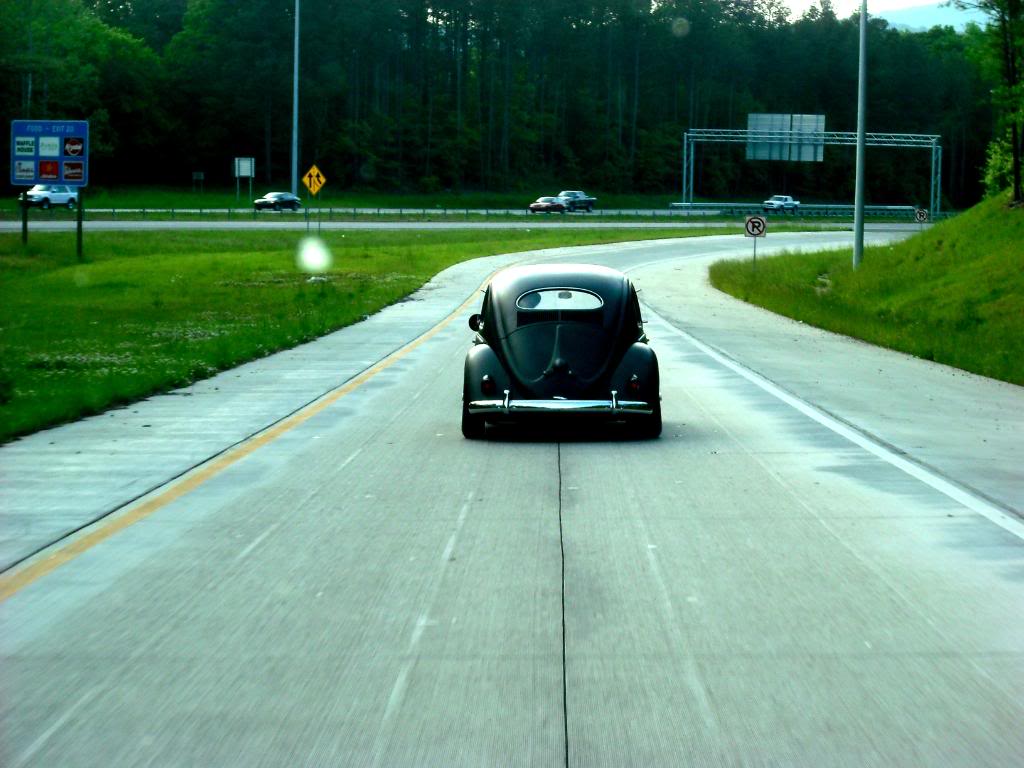 That is one bad ass bug :Rockit:

thanks man, i worked on it all day, put in a new distributer, rebuilt the carb, new plugs and wires, but i need a new fuel pump and spacer. it also has a new seat covers and headliner, i'll get pics soon.

well i guess its about time for me to update this thread, i've been working on the oval for quite a while now, and i'm happy to be able to step back and see some progress, over the last couple of weeks i have rebuilt a 1600 dp for the car, its completely stock with the exception of dual carbs, but it is a huge improvement over the 36hp.

on to the pics 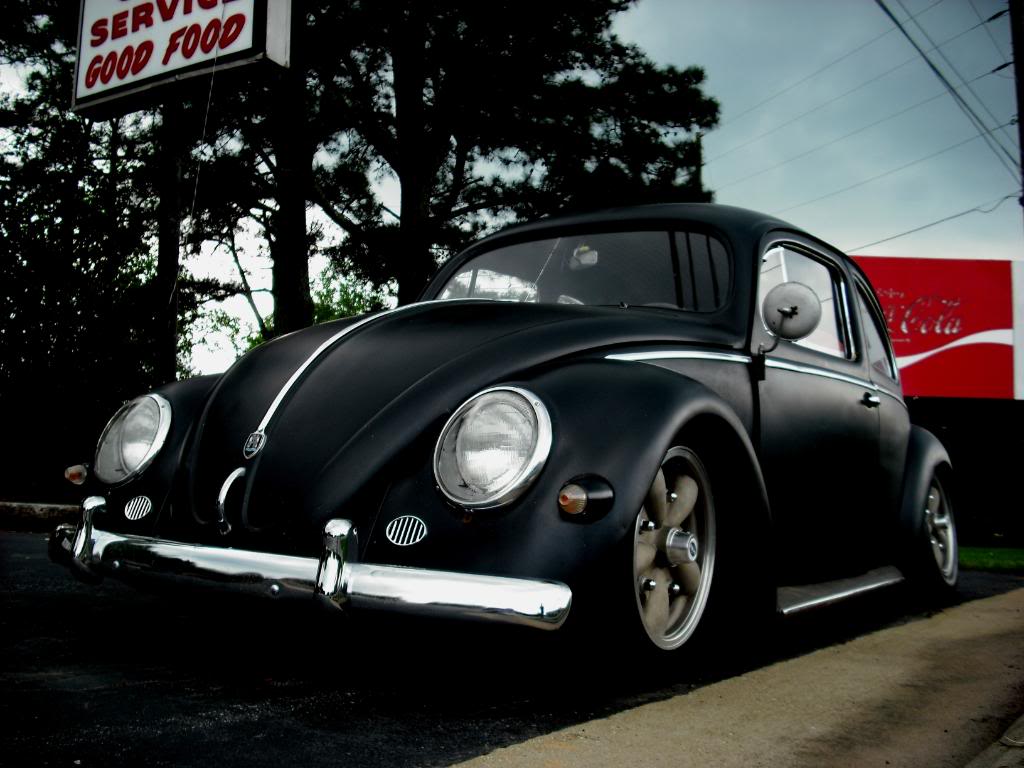 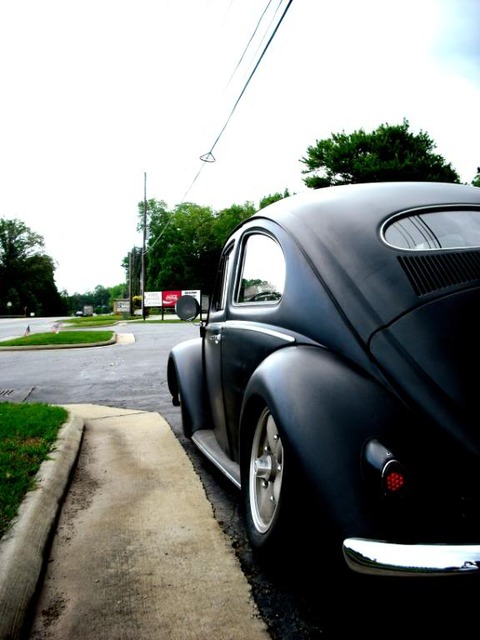 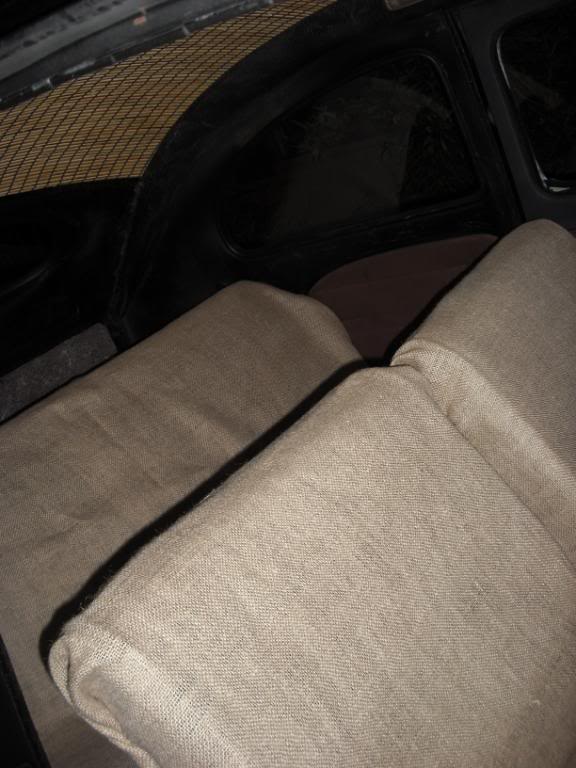 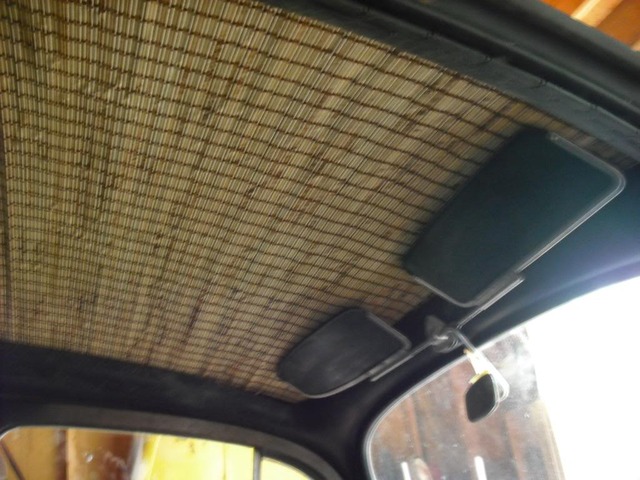 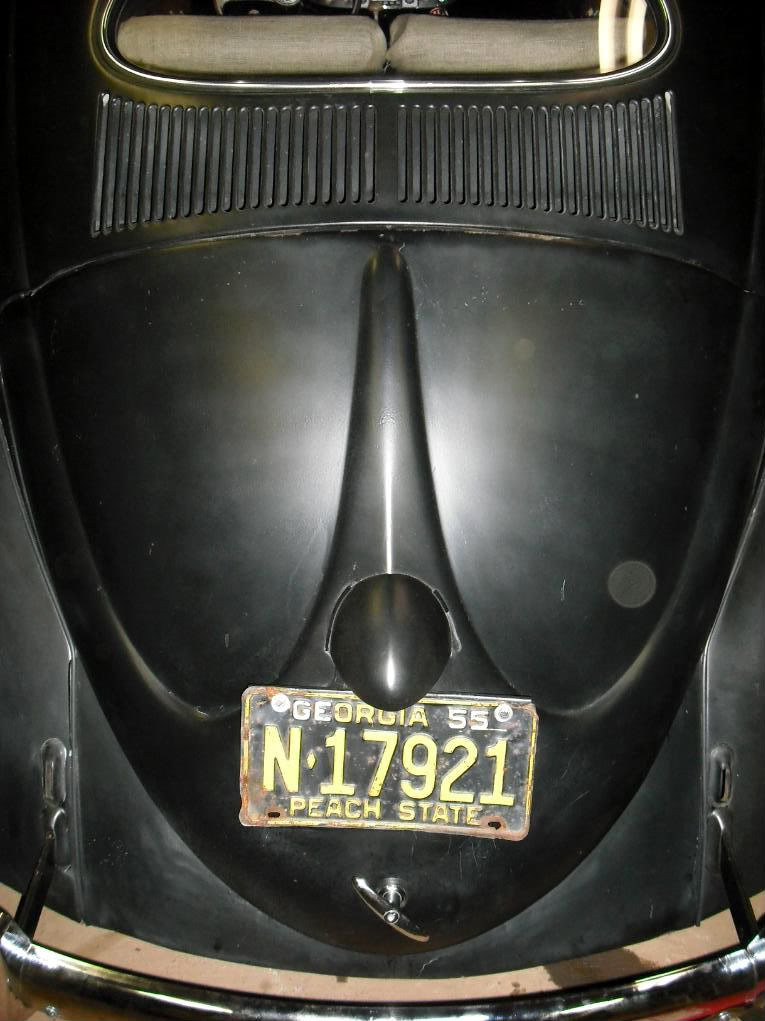 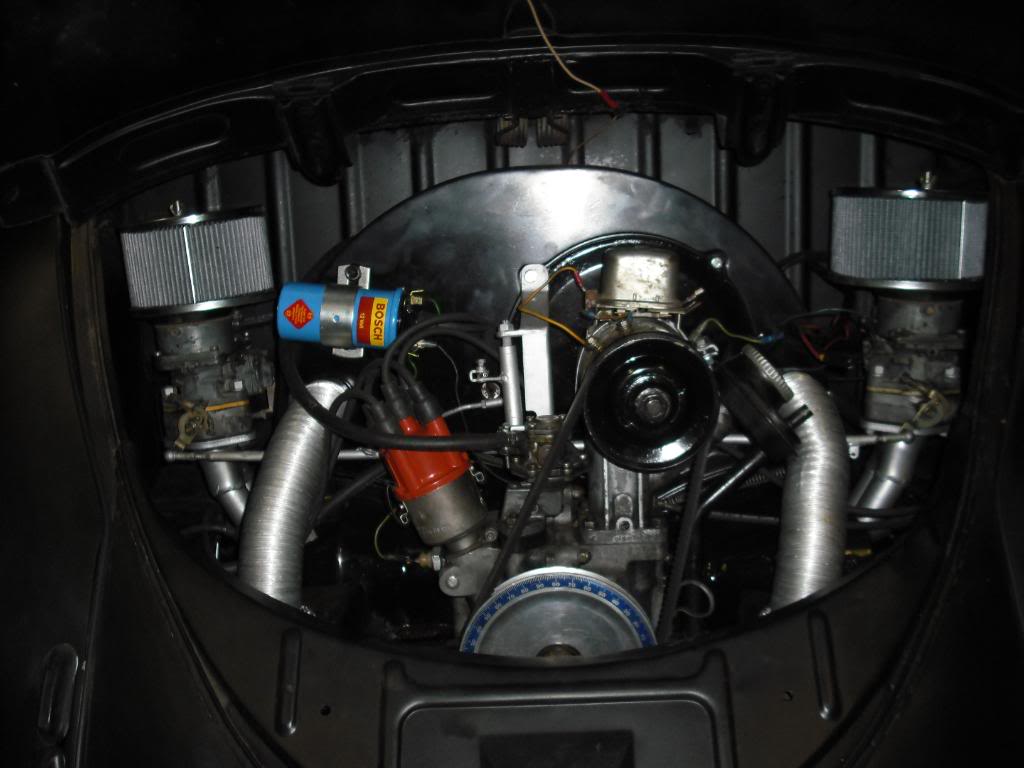 I took the oval for a little cruise today, seems to run well. the dual port has plenty of get up and go, compared to the 36hp that is. i also raised the rear up a little via the adj spring plates (if you want to lower your car i highly recommend them) i'll keep it up for driving around town, that way i dont end up changing axle tubes like socks. 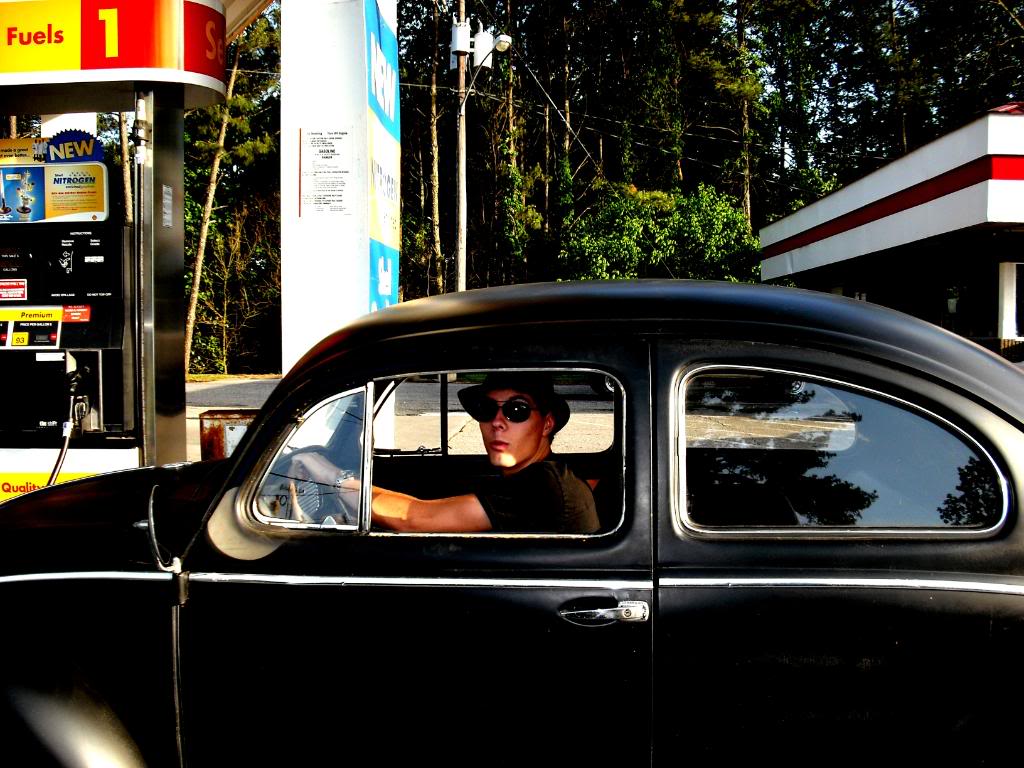 [quote="59 Euro Rag"]I took the oval for a little cruise today, seems to run well. the dual port has plenty of get up and go, compared to the 36hp that is. i also raised the rear up a little via the adj spring plates (if you want to lower your car i highly recommend them) i'll keep it up for driving around town, that way i dont end up changing axle tubes like socks.

those plates break!!! trust me please

ive had notched plates on my beetle for ever and i would trust those before adjustable plates. ive had 2 sets snap i have pics on my old computer ill find, and i know tons of people who will say the same thing.

okay then, i retract my previous statement, and will be looking for some replacements, Thanks for the heads up!

I havent posted anything in here for a while just thought i'd do a little updating
i had a mini panic attack will doing some researching and reading numbers wrong, i almost thought it was an early 56 because of the 1-0 on the begining of the VIN number, turns out the car is from April of 1955, which turns out to be a confusing month as well as a confusing year.

for those who dont know, vw used actual year dates to determine the year model of the car in the early years, while US cars went by an offset year models that started in aug. in 1955 vw switched to the US year model system

when vw switched in 55 it made a big mess along with the switching of lights and other parts. so technically 55 beetles were only made for a little over a half a year (jan 55 to july 55)

i also found that my car being an april produced car, is correct to have bullets and snowflakes, on US cars heart taillights stopped in 1954, and in 1955 the egg lights were introduced. for the most part 55 ovals had semi's and heart taillights that is until may of 1955.

SOMEONE PAID FOR MY CAR TO NOT HAVE SEMI'S!!!!

although they may not have had a choice since the USA was getting stricter on the safety of vehicles hence the 56's permanate switch to flakes, bullets and overriders...

sorry if everyone already knew this info... 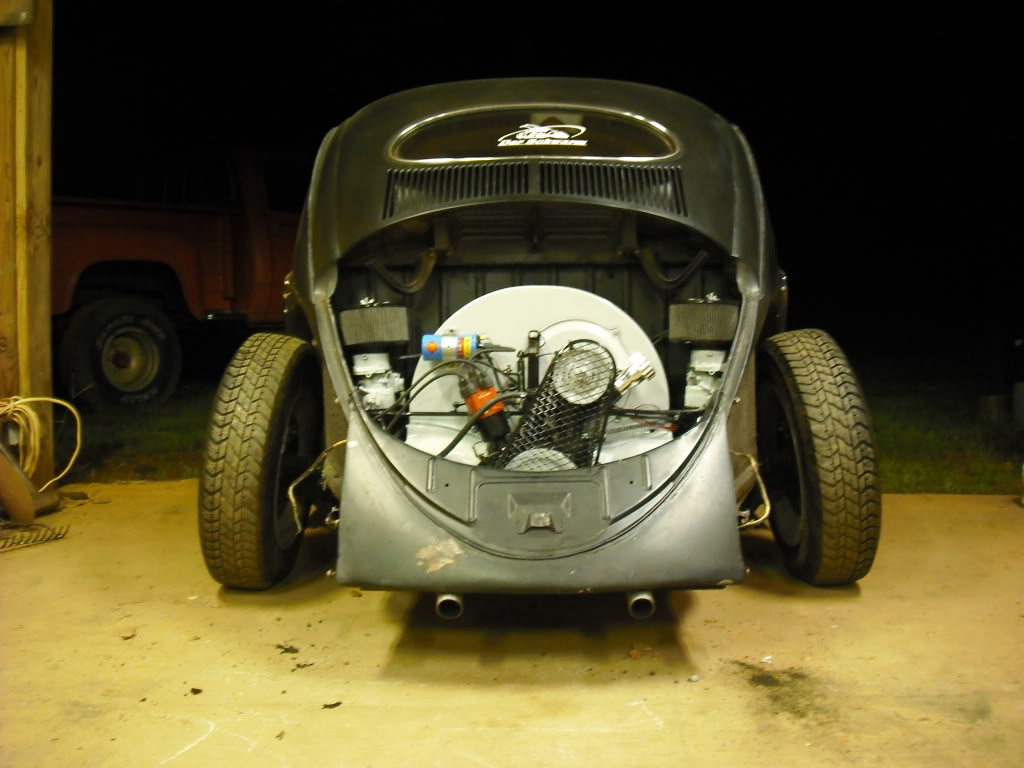 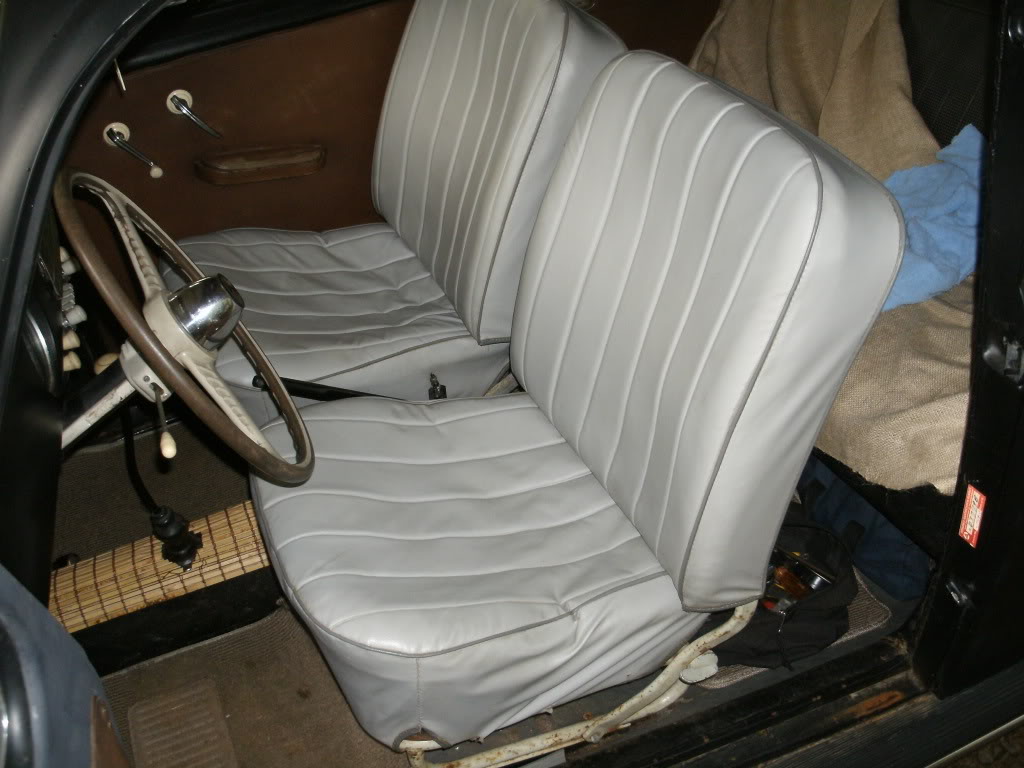 havent really done much else...just drive it and put in a makeshift audio system...

oh, and one update that wont be reviled till BAP!

dude its looking sick when are we goig to have this oval nite out? good job looking to see whats the secret for BAPS

That's cool that it's got the ribbed door handles and window cranks.

I haven't updated the thread in a while so...

the secret for BAP was the smoothies aswell as the door cards were dyed to match the rest of the interior. 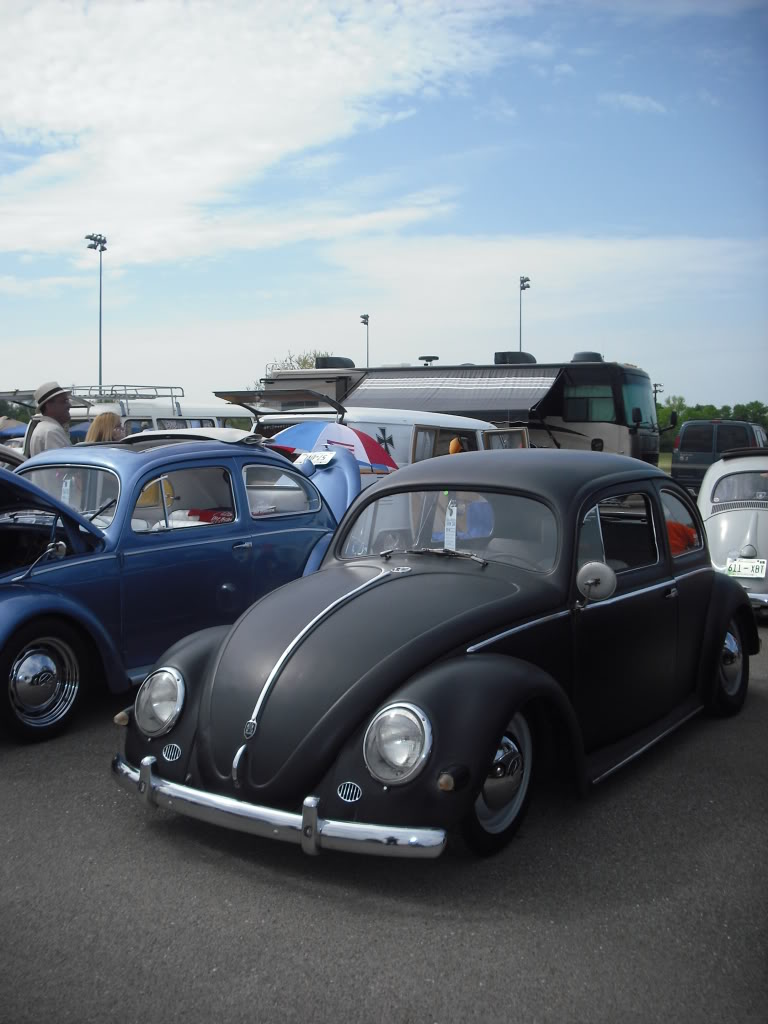 since BAP I replaced the drivers side ribbed door (Huge thanks to Billie!!!) with a much better door, the other one was pretty ruff on the inside.
and replaced the mega mirror with one i like much better,

the engine has been rebuilt once again, due to the last block being faulty (poured out oil)

on the todo list is replace door hing pins, and repair passenger side door

well i had a blast at Y U Buggin, but seeing all the sick cars made want to get back to work on the oval.
pics at Y U Buggin:

Therefore, deconstruction begins!!!
this is what i have after a couple hours work... 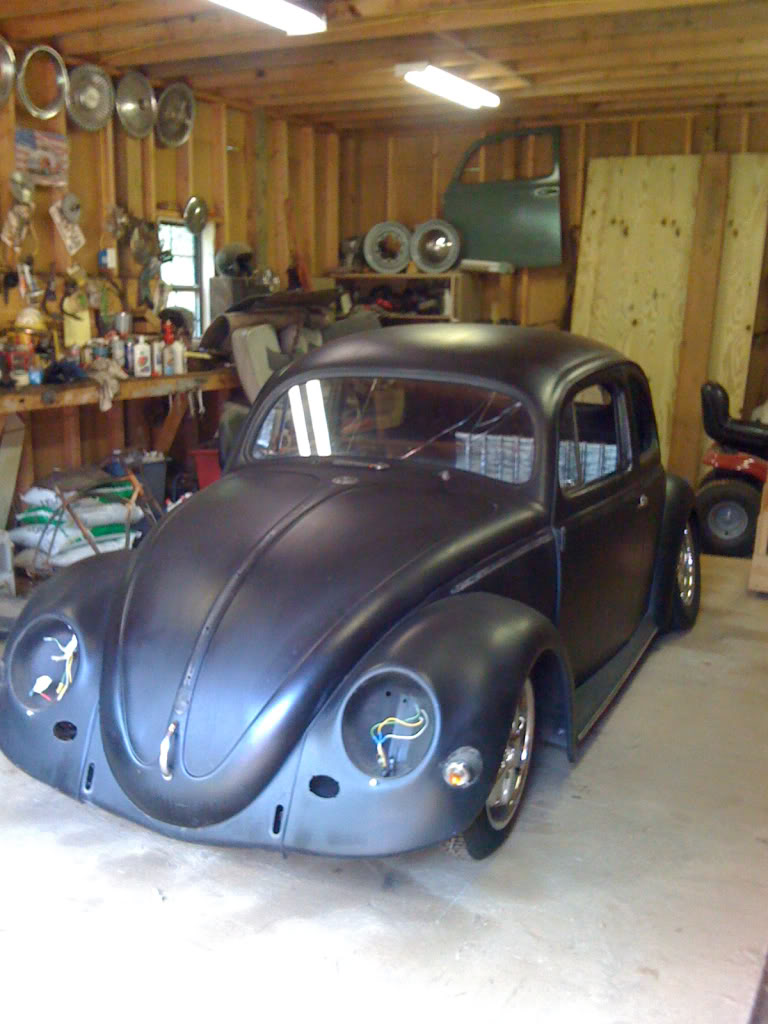 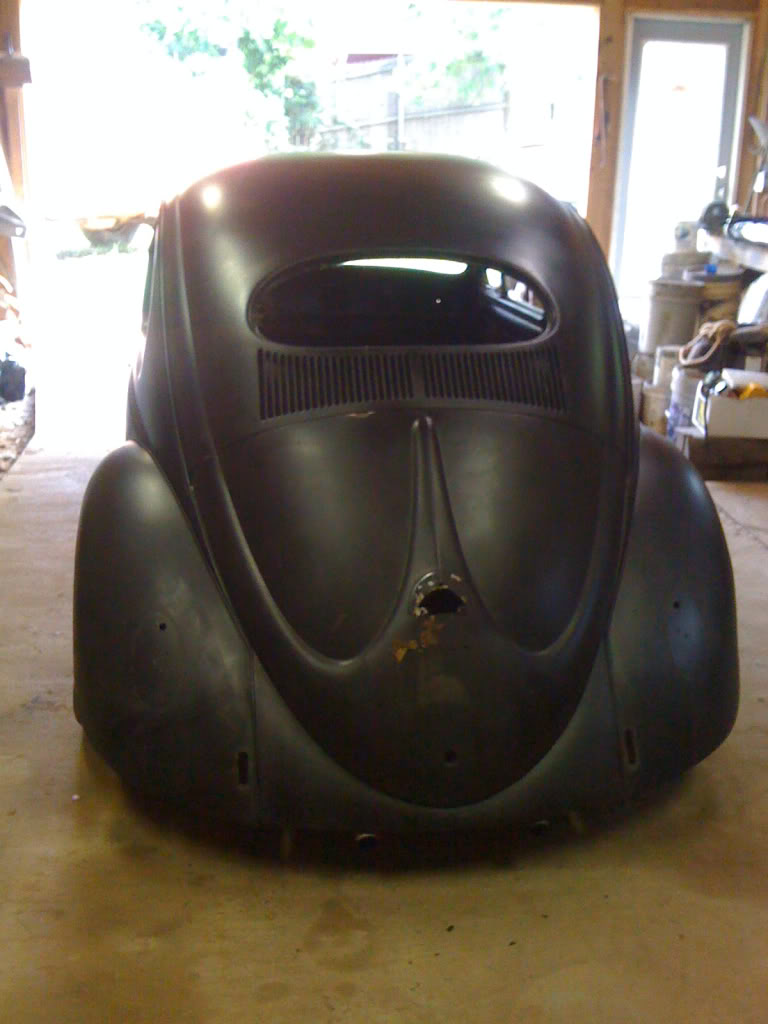 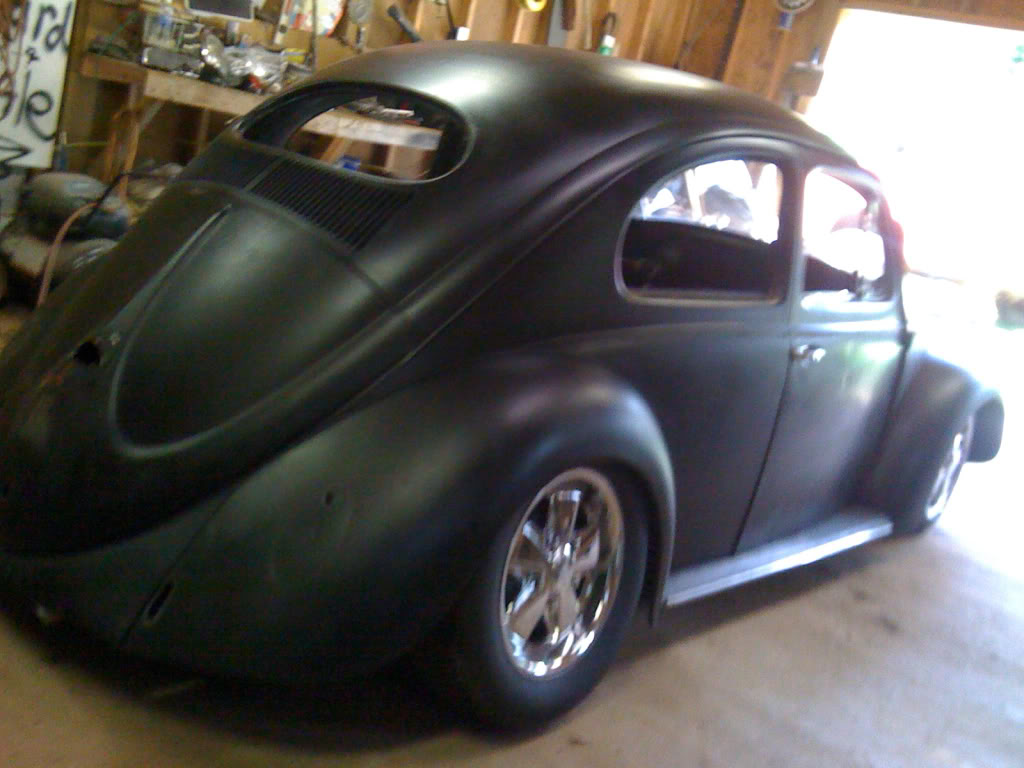 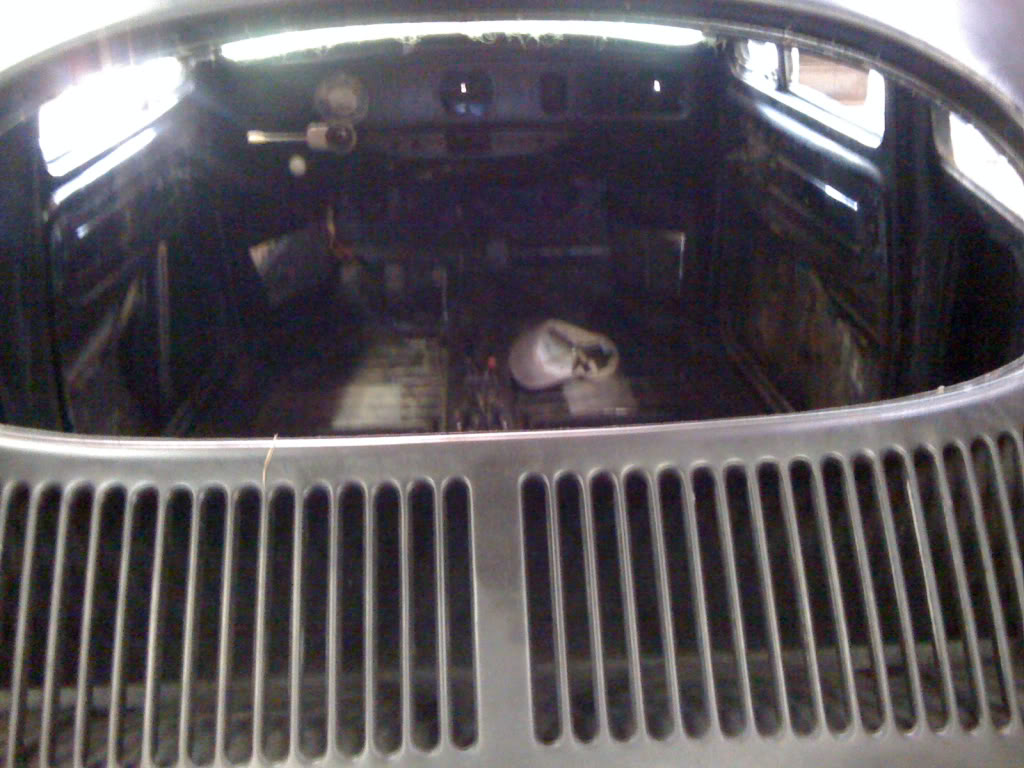 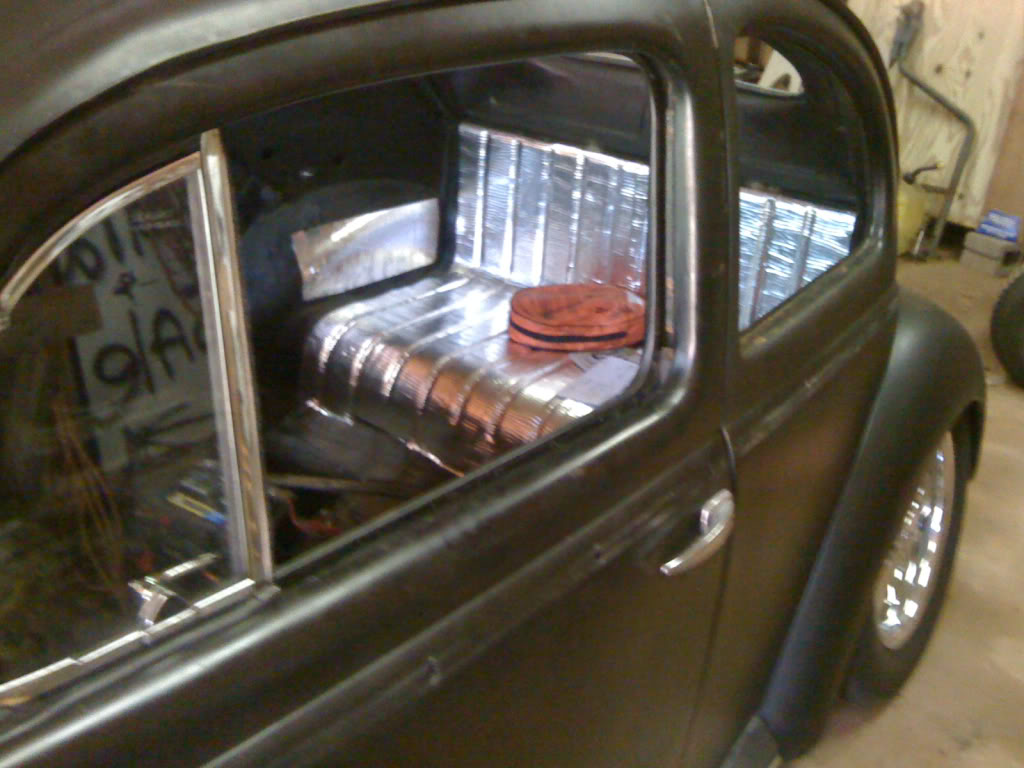 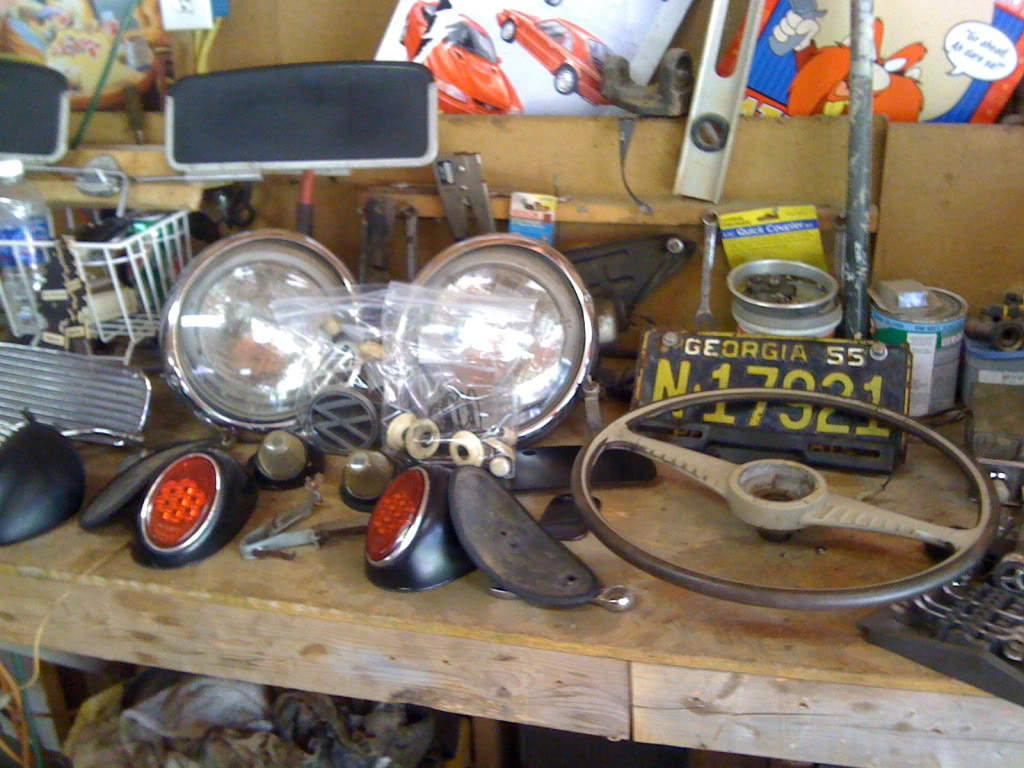 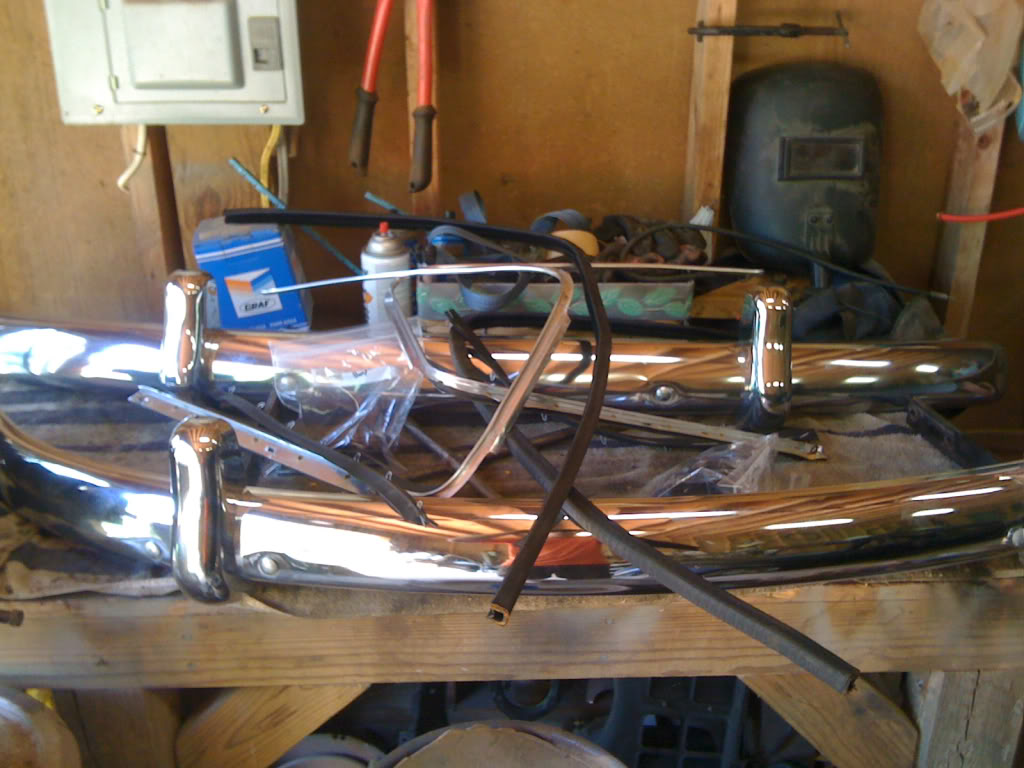 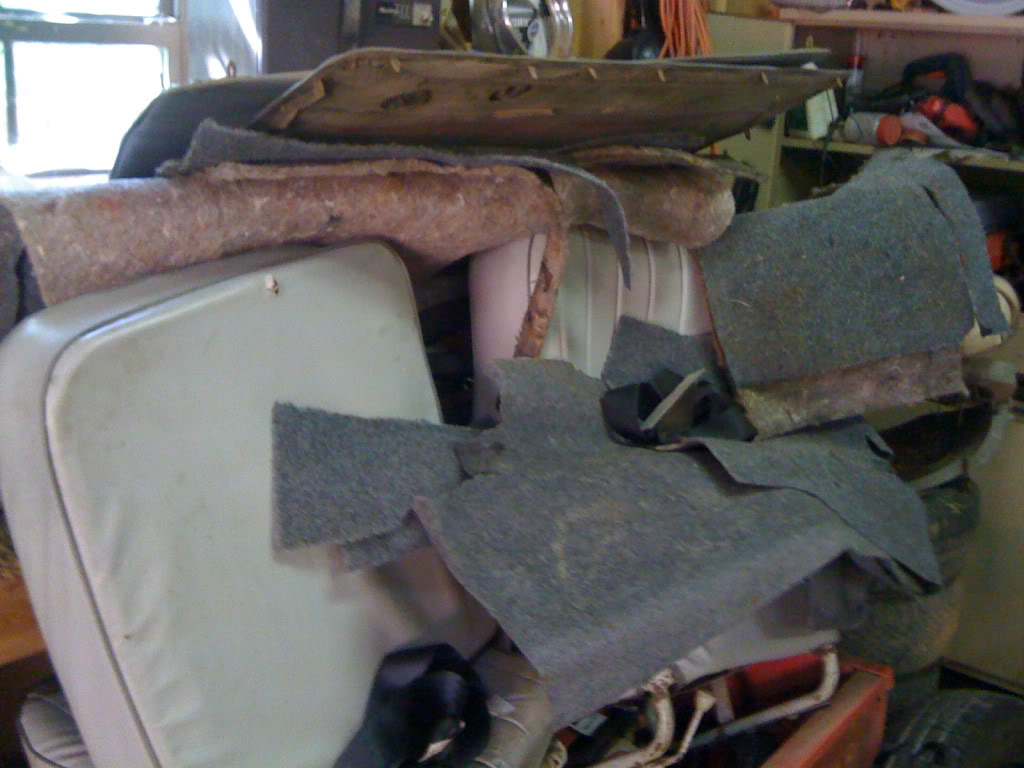 Im going to be taking care of the rust and cleaning the car up, detailing everything, and hopefully getting this car back to what it deserves to be!

Im going to try to keep this thread updated as often as I can, and as always, the more feed back, the better!