It looks like you still got a ton of room in your picture, you'd likely be ok, but I really can't say for sure.

Here's a pic of mine when I switched over to the alternator. You can see how close the mushroom style pump sits. 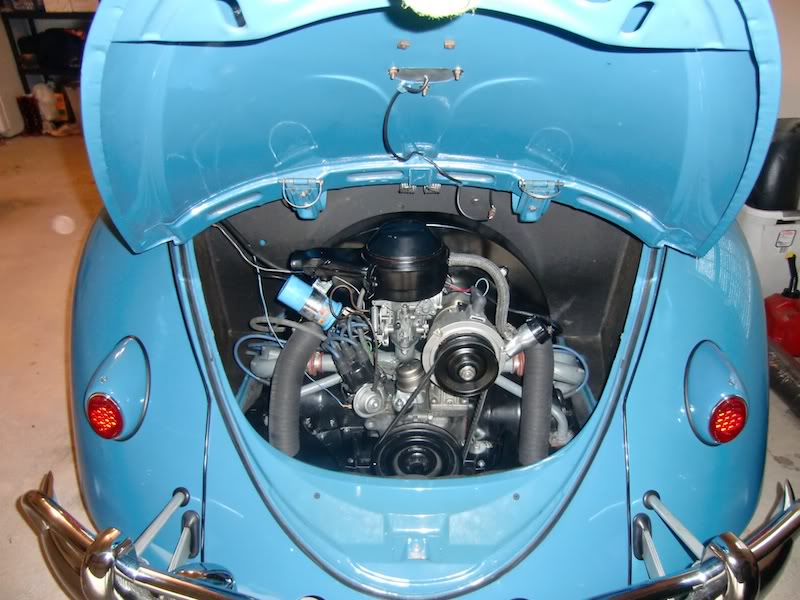 So I guess ill have to order one.

And what kit did you get eric?

Well, I'd probably order another pump (and correct length pushrod!) just for the heck of it. Then get your alternator and see if it fits with your current pump. If it does, then keep your current pump on there and keep the replacement in the car as a back-up. If the current one doesn't work, you'll have the new one ready to install.

I got the TanbugWerks Kit

. I was over at Tanbugs house and mentioned I wanted to swap over, and he said he had a kit he bought and never used, so I bought it from him. He had gotten it from CIP1. It's this kit; $150 and comes with a 55amp Non-Bosch alternator and all the other goodies.
http://www2.cip1.com/ProductDetails.asp?ProductCode=ACC-C10-5750-KT

I only used the alternator, belt, and pulley from the kit since my car already had an alternator style stand on it, and I reused by original shims, strap, and backing plate. I think you can re-use your generator's pulley as well, but I didn't since the new one was nice and shiny.

Ill just get that kit then

now i have to wait for it to get here lol

Fuel pump will work. You just have to get the alt lose when you have to switch the fuel pump (if it breaks). I'd wait till the fuel pump breaks before I replace it.

ok how would u make it loose? just loosten the strap?

your current pump will work....to change it no need to loosen the alternator....just take loose the top screw and pull the cap off the pump that will give you enough room with the alternator installed to remove and replace the pump

maybe grandma will let me drive her super

If you got the new one coming, just replace it. It is much easier to replace. I used a new Mexican pump. I put a spot of JB Weld on either side of the fulcrum pin before I installed it. I heard they had issues of backing out. Unless you have an oe style pump and want to keep the look, just replace it. Only two bolts and the new push rod.