I picked up this buggy about a year and a half ago.  I have been wanting to build it but I have just kept putting it off.  Not sure if I can get it done but would like to take it to Panama City show in April so we can have a fun car to run around in.  Then we can leave the bus setup at the campground.

Anyway today I tore it apart.  I knew the chassis was iffy at best when I bought it and I was right.  They did a straight cut on the tunnel and the fit is terrible and the welds were horrible so I am going to scrap it and start fresh with another pan.  Not sure exactly what the plan is for the buggy as for the look but I guess I will figure that out as I go along and of course depending on time/money.

Went and looked at it down at Bugeyed 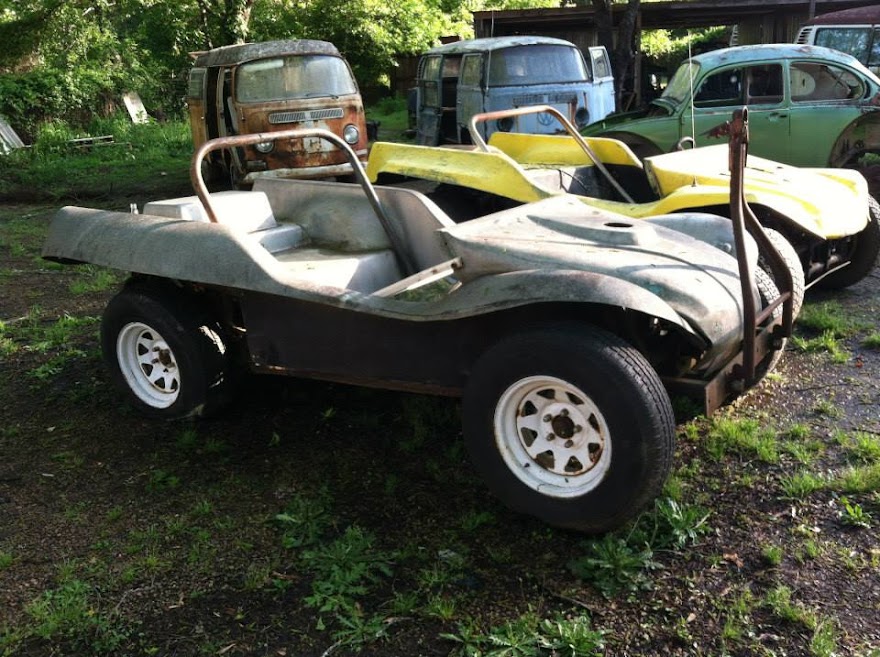 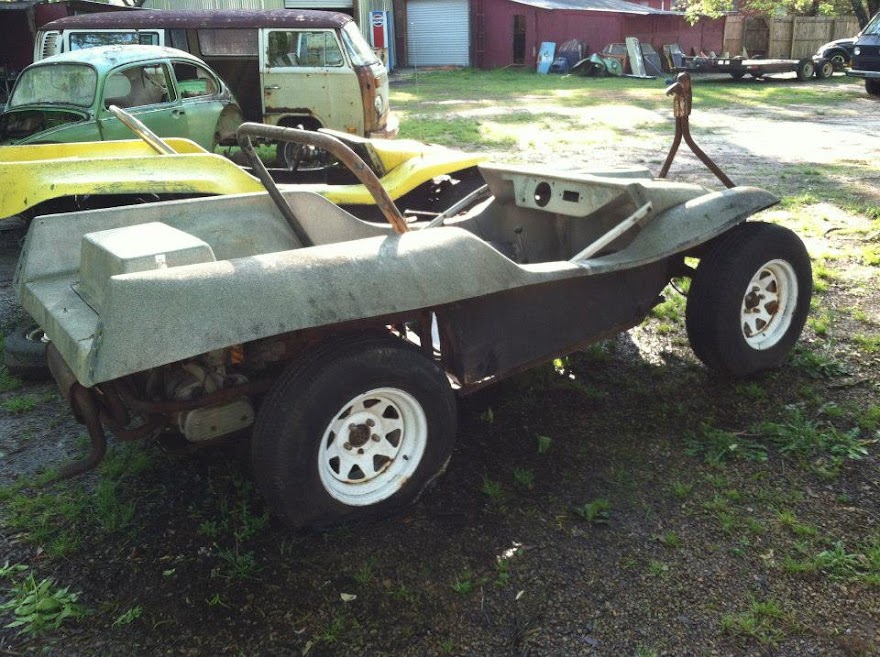 When I first brought it home May 2013 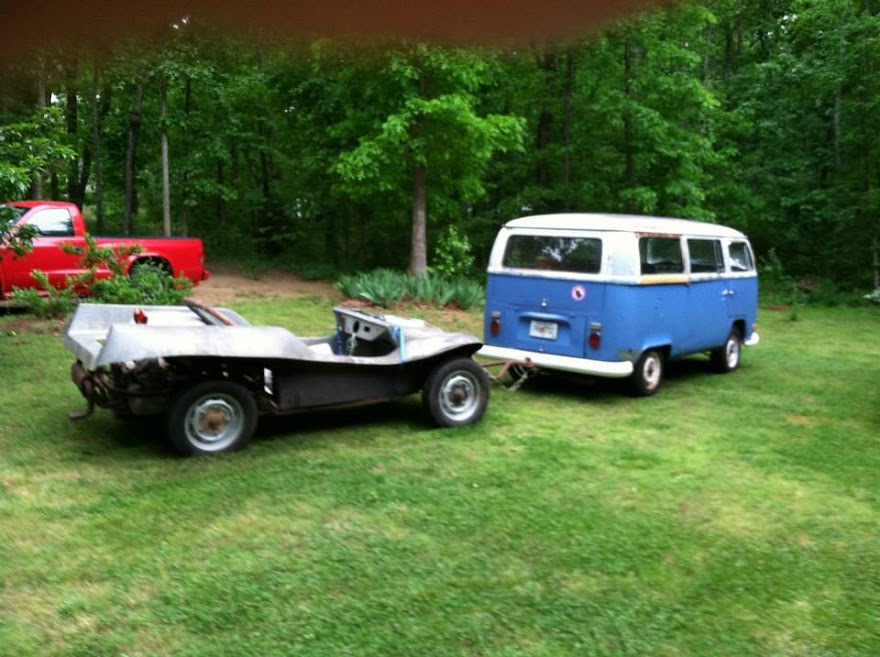 Found another buggy chassis on Craigslist and picked it up for $80.  It turned out being way too rough to use but I did get three cool buggy wheels and a fourth that needs to be re-barreled.  It was a 68 pan and the transaxle looks and feels good along with the beam.  I ended up stripping every nut and bolt off of the pan and scrapping the tunnel. 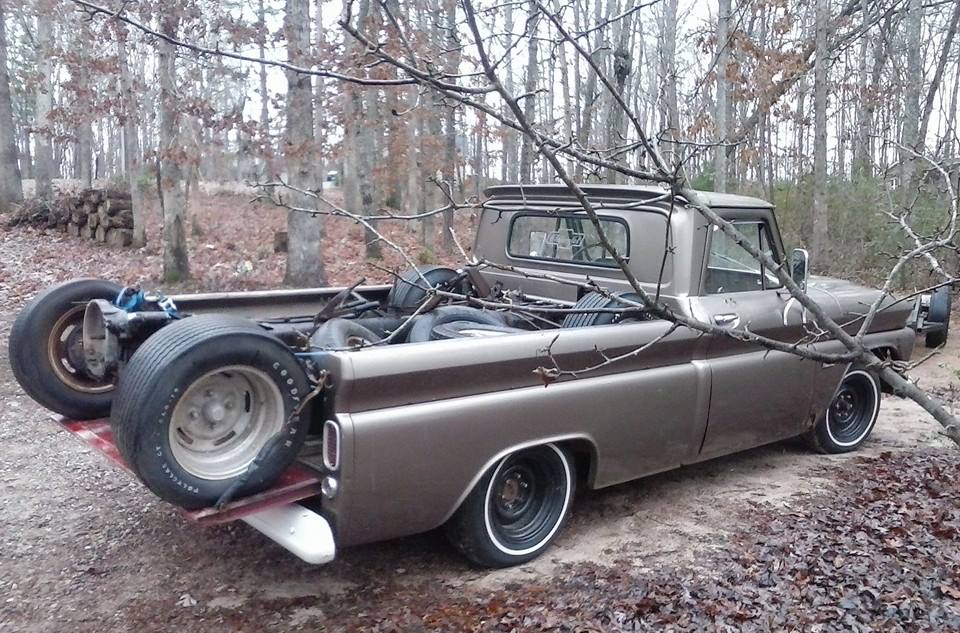 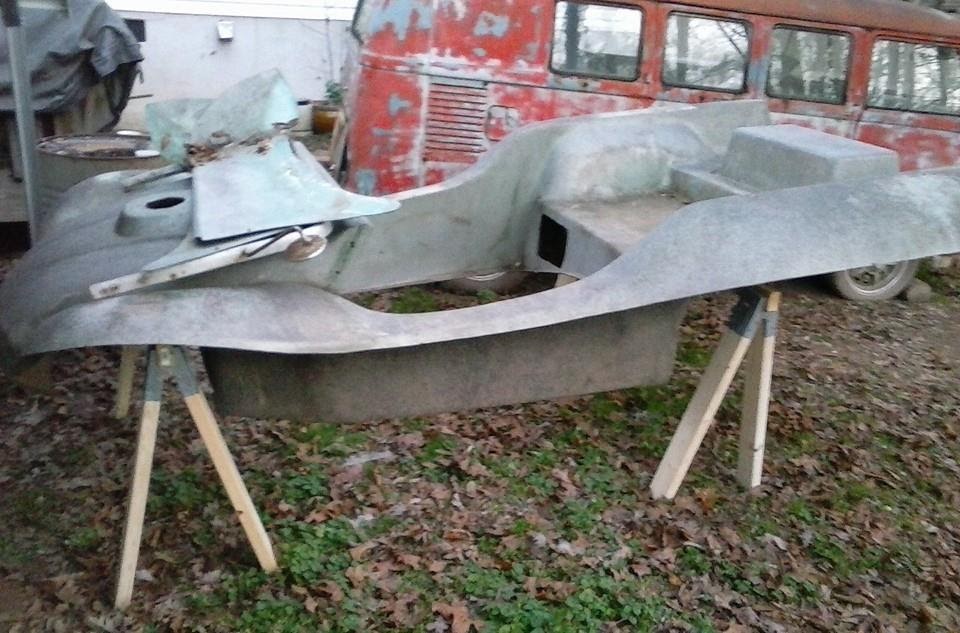 After stripping everything but the e-brake handle (which I just can't get loose) on the original buggy pan.  The engine still turns so it may be good.  Same with the transaxle, it shifts like it should so I will keep it for another project. 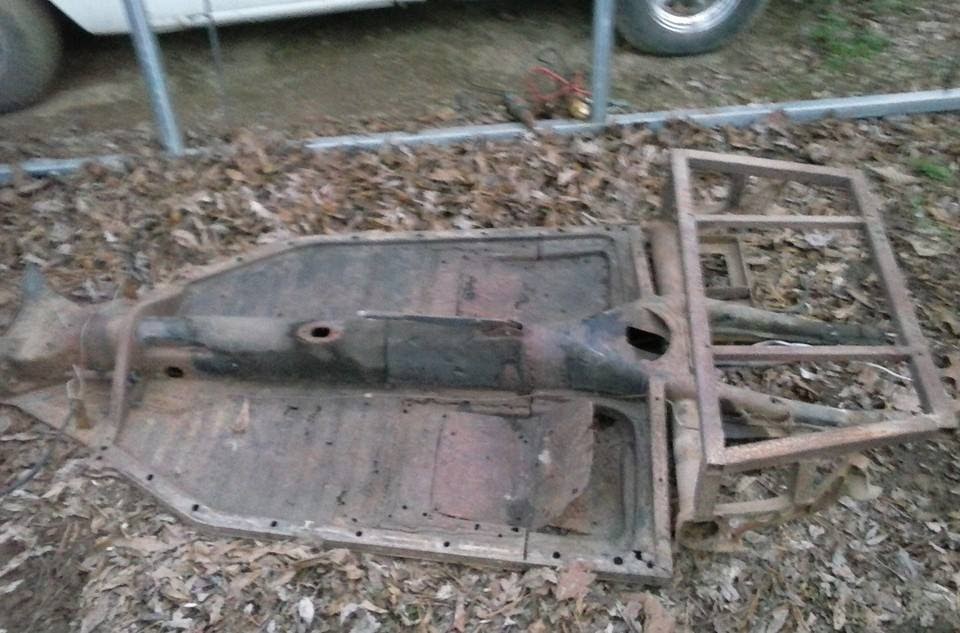 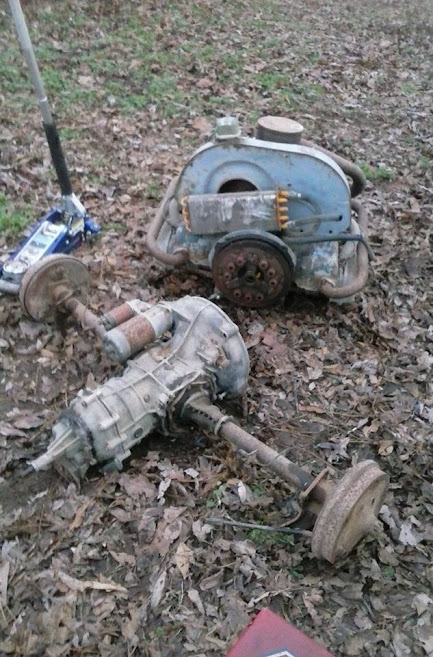 I have been working on a plan for the pan the past couple of weeks.  The original shortened pan was done poorly and I was not going to reuse it.  I ended up picking up an irs pan from Mike to use but the frame head was shot on it.  So I was stuck.

Since this is a budget build I figured I would try to use what I had.  So I started off by cutting the clutch tube, accelerator tube, heater cable tubs loose from the back of the irs pan.  Then I cut it in half behind the e-brake and threw the front half in the trash.  Then I took the original shortened king and link pan and cut it along the weld where it was shortened.  There was zero welding done on the bottom and the tunnel.  I cut the top part and the tunnel fell in half.  When they did the straight cut on the pan they also cut all the tubes in the pan.  So there went my plan of trying to use the original tubes.....

So I went ahead and pulled the cut accelerator and clutch tubes out of the pan  because I wasn't going to use them like that. I went to Summit Racing and purchased some tubing to replace both of those as well as some 1/4" fuel line. I measured my body to find that is was only 14" shorter not the typical 14.5" that manx buggys are.   I knew I was going to z cut the tunnel back together so I started by squaring off the cut on original front tunnel.  Then I measured from napoleon hat to the cut.  Then measured a stock pan from napoleon hat to rear crossmember subtracted what the front tunnel measured and 14" to get what I needed to cut the top portion of the z cut for the back.  I had to make sure the bottom part of the z-cut on the back tunnel was long enough so the floor pan mounting area was to the flat area.  Anyway I got it back together now and yes it was a ton of work!

I didn't take many pictures but here are the ones I have.....

Look at how they put the pans back together and the crappy straight cut welding job they did. 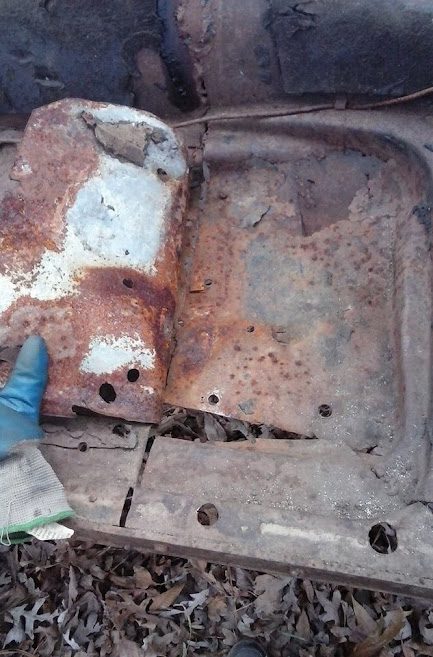 After cutting up two chassis and a bunch of measuring, cutting and fitting I finally got it looking like a usable pan again 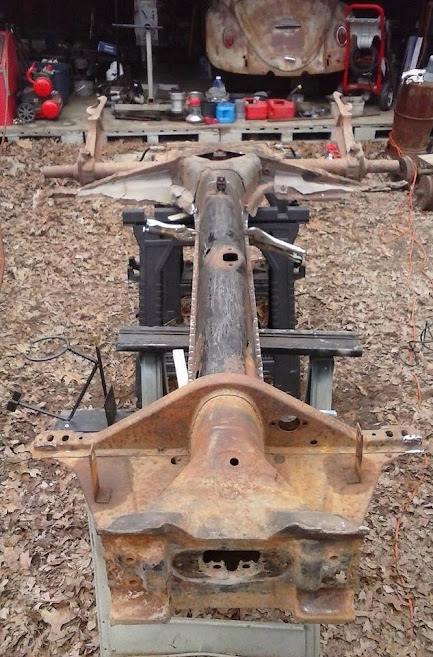 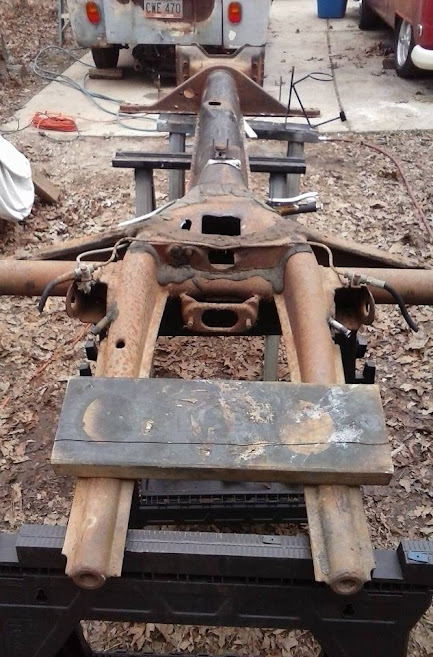 Z-cut instead of straight.....two reasons (1) Strength (2) now cut down factory pans have a nice flap lip to lay on instead of the back half being 3/4" higher than the front lip 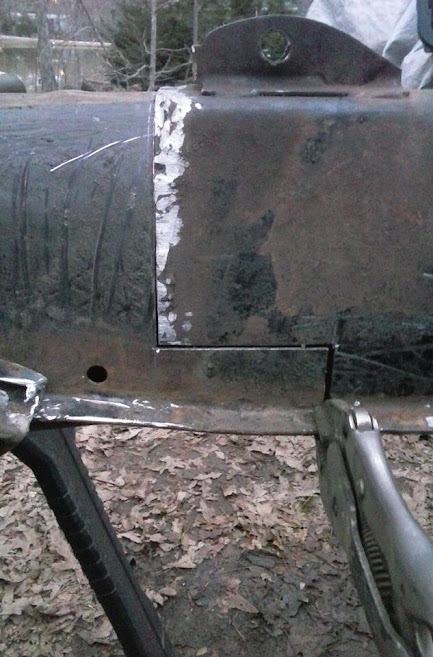 Pulled all the tubes out of the pan except the e-brake cable tubes and the clutch, accelerator and fuel lines that I put back in.  That left me with a but hole where the heater control knob was and two hole for the rear heater cables so I welded them up! 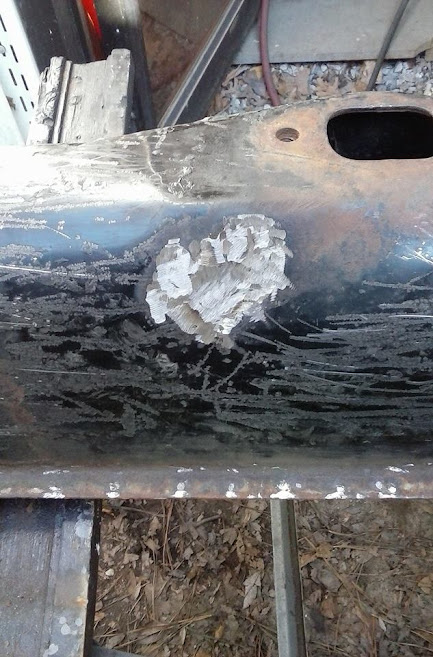 Finally all welded up, all the old pans removed and the new accelerator and clutch tubes 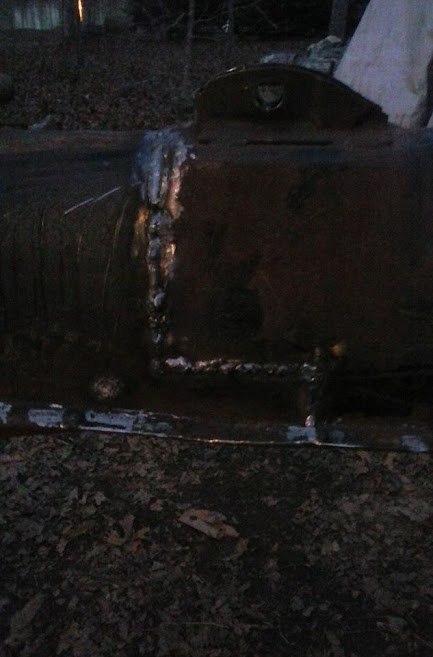 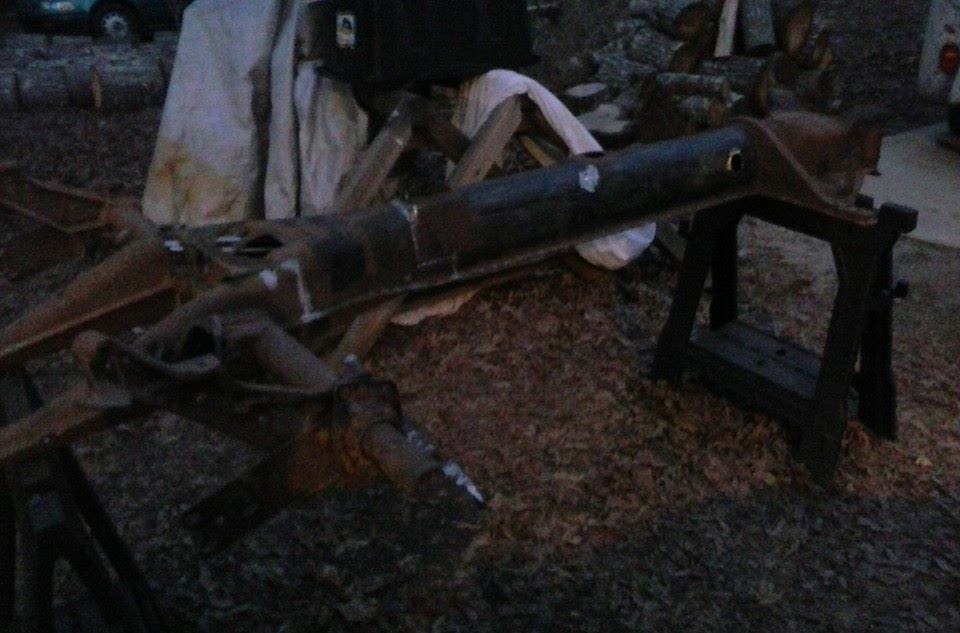 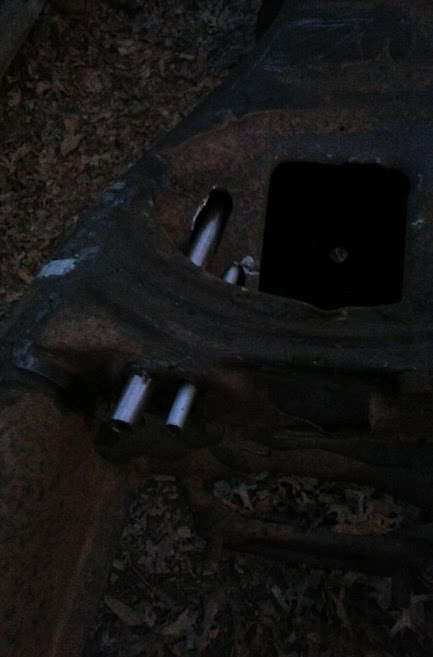 Looks Great. This will be fun to drive when its all done.

Hey I know this guy that has a carb setup for sale. ROTFLOL

Seriously though, it looks good so far. Awesome. You doing your own work on it? If so, I am impressed.

68vwnut wrote:Hey I know this guy that has a carb setup for sale. ROTFLOL

Yeah I thought about your carbs for one of my other cars.....did you see my post on facebook to you that I have a set of rivieras that I want to sell?

68vwnut wrote:Seriously though, it looks good so far. Awesome. You doing your own work on it? If so, I am impressed.

No I didn't. Like I said, awesome and impressed. It is nice to see someone else that gets their knuckles messed up too. Congrats on the find.

As far as the carbs and rivieras, what deal can we strike up? I have centerlines, but I promised those to Tim. Nice guy, can't wait to meet him personally and conpare notes on VWs. I also have that Weber 40IDT. Maybe that would be better on the buggy?

Don't need tires. Have Eagle Gt Plus S Rated tires from the centerlines, 205/60 backs 195/50 fronts. Just got finished putting my Del40's on, the 009 on and then stood back looking at the engine imaginging how it sounds. I can not wait to fire this thing up.

Dang Bryce nice work. I like how you z-cut it, makes sense for strength and so the pan will fit better and not just step down. Great progress.

That's great that you'll a solid pan under that thing- instead of the cobbled together one that you had- nice work, Bryce

60andslow wrote:Dang Bryce nice work. I like how you z-cut it, makes sense for strength and so the pan will fit better and not just step down. Great progress.

Thanks David!  The real satisfaction will come when I get the pans cut down and hopefully looking like a factory 14" shorter buggy!
Not like this....

But more like what Jeff did on his Manx 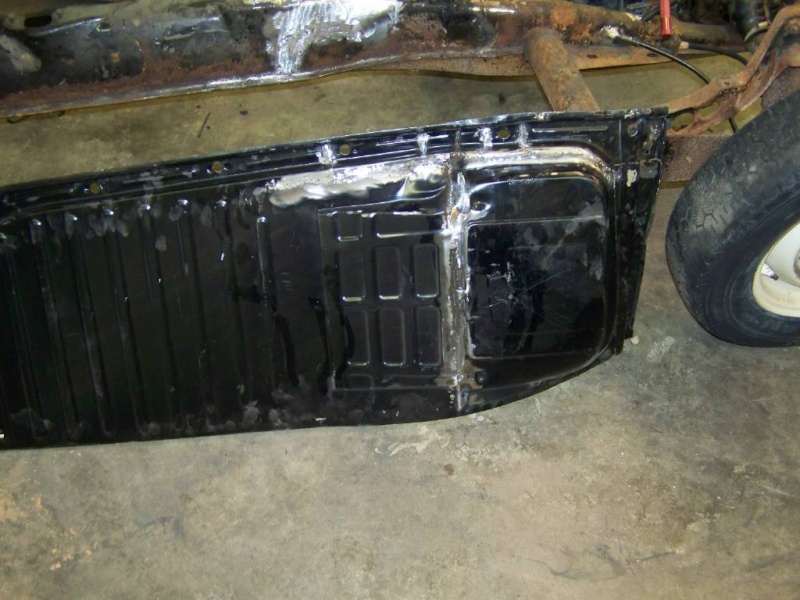 Grifspop wrote:That's great that you'll a solid pan under that thing- instead of the cobbled together one that you had- nice work, Bryce

looks good Bryce. Now the fun begins with the pan halves. I need to update the manx, she's going back together.

56rag wrote:looks good Bryce. Now the fun begins with the pan halves. I need to update the manx, she's going back together.

Thanks Jeff! I was wondering how the manx was going. Yeah the pans are fun started on them today!

Passenger side shortened!  Still have lots of finish grinding and welding before I can install it but at least its done!  One down one to go! 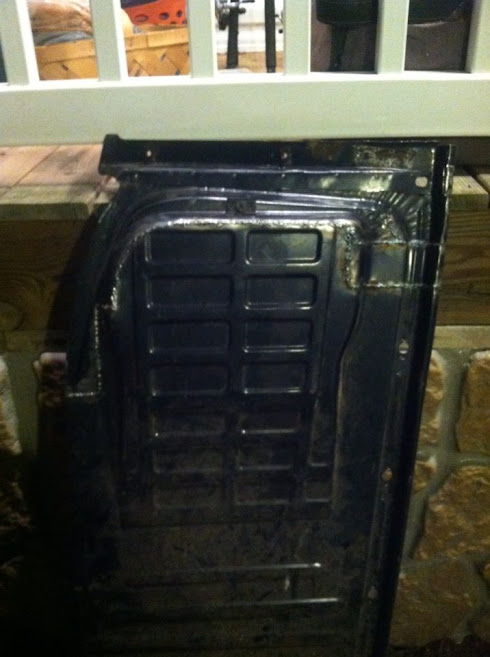 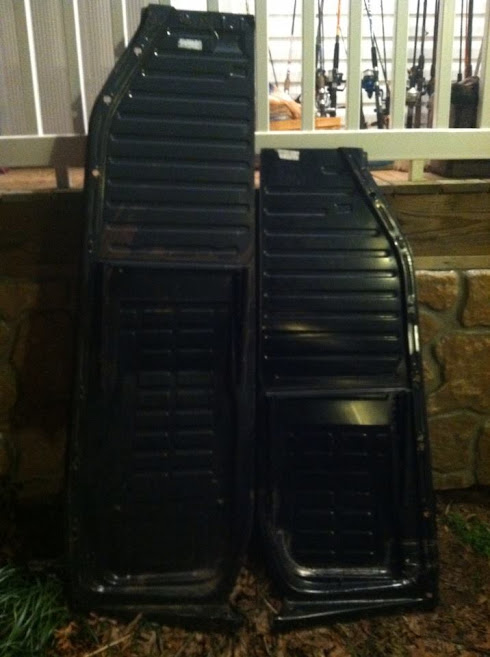 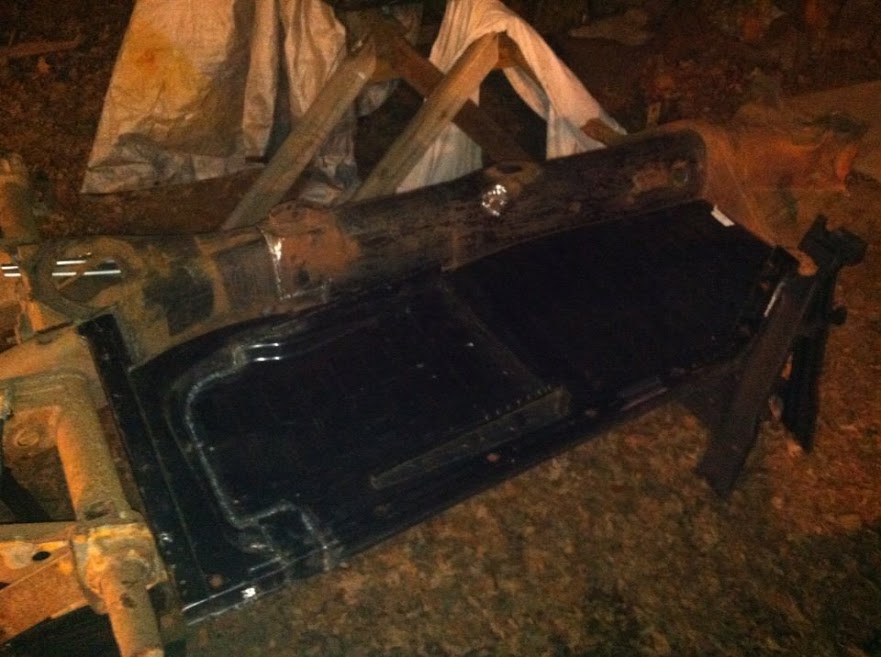 Its a little harder and more time consuming doing it this way, but they look a whole lot better. Great work.

56rag wrote:Its a little harder and more time consuming doing it this way, but they look a whole lot better. Great work.

Yeah it was time consuming! At one point I thought I had ruined the pan but it turned out. And yes they do look a whole lot better doing them this way. You would think gerson or someone would modify some dies and make a 14.5" set of shortened pans that could be trimmed on the back edge for shorter buggies so one pan could do most.

Drivers side done!  This side went much faster and came out better.  Need to pick up some weld thru primer and finish grinding the welds. Then I can get the pans welded in and the chassis off to the blaster.

Ron came over today and gave me hand with the buggy.  Thanks again for the help Ron.  The pans are now welded in! 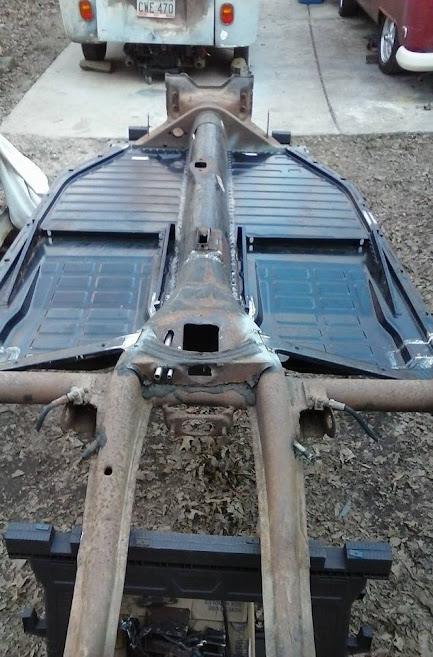 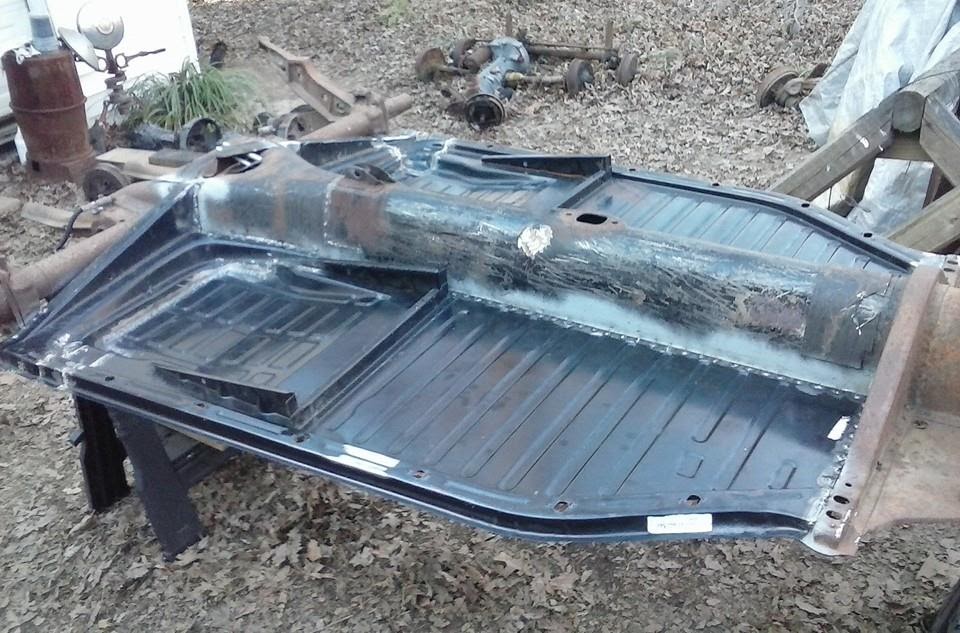 Chassis is ready for the blaster.  I am just waiting for the weather to get right so when it comes back from the blaster I can get it painted asap.  So in the meantime I finished the barrel replacement on the front wheel that was rusted out.  I found the steel 14x6 at the junkyard.  After cutting the center out and grinding down the plug welds I flipped the barrel over and installed the center.  Doing this gave me the lip that I needed to match the other wheel but I had to weld the valve stem hole up and drill another on the new front side.

Before with the rusted out barrel 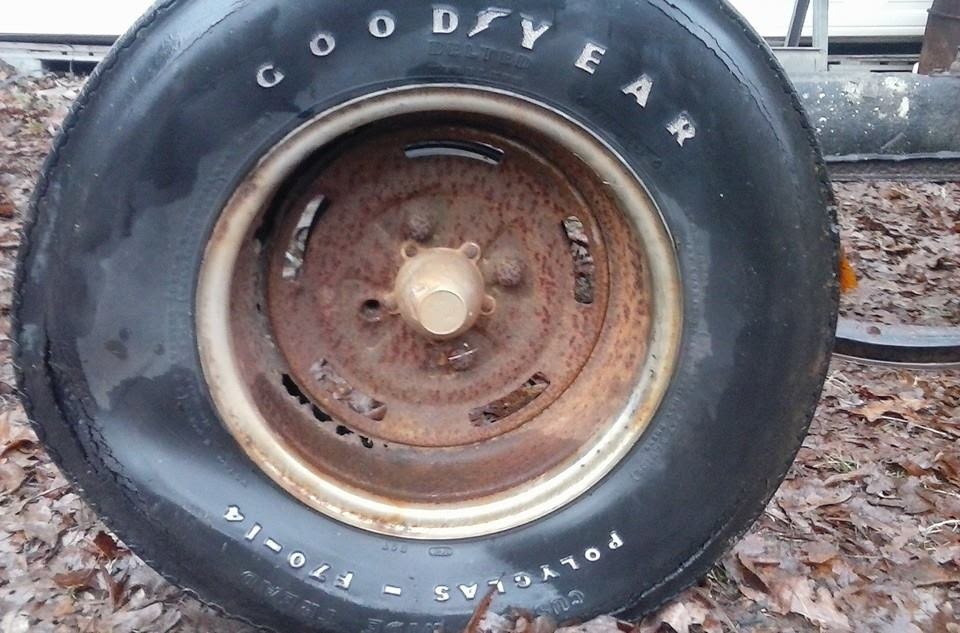 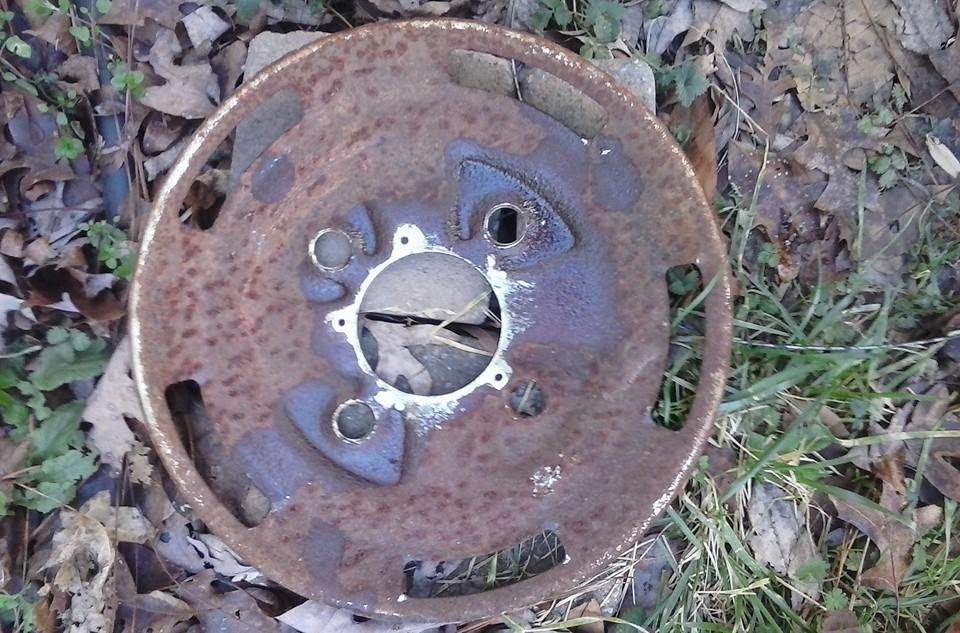 Mike torched the stock center out for me 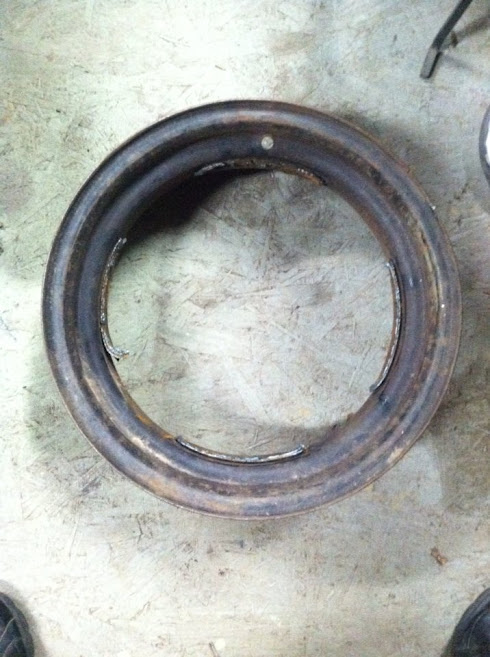 Center welded in with center cap mock up 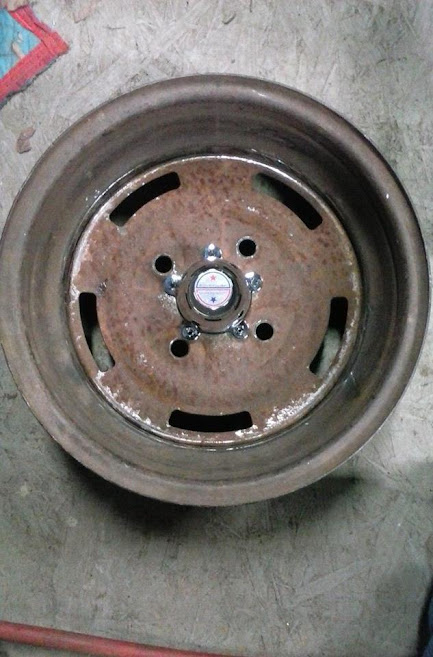 How is the contour of that barrel in relationship to the other 3?
I like this in that I have all necessary tools to do this...
Cool custom wheels with custom offsets for the Ghia issues we all have on the rear.

The barrel is almost identical to the one I removed.  I did have to flip it to give it the same lip as the rusted original.  Meaning the donor barrels inside is now the outside. As long as you have something to spin the wheel to check run-out before and during your welding you are good. I just used the trailing arm and drum I removed from the buggy strapped to a saw horse.
_________________
1958 Euro Beetle "Raggedy Anne"
1959 Ghia "Elvira"
1961 Beetle "Old Blue"
1964 Beetle "Pat"
1966 Chevy C10 swb fleetside
1967 Black Friday Bus