1970 Beetle p/o installed 1500cc single port instead of oe 1600cc single port (only year of the 1600 single port by the way) though i/ve heard the 1500cc single is a better motor anyway. Another interesting note is that 1970 was the only year with its taillight/engine lid combination. It is the only hardtop with a "convertible style" rear decklid (70-72? standard, 71-72? super, not sure what year they stopped)) as well as "small" triangle style taillights (68-70). The taillight housings are also unique in that they are the only "small" ones with holes for the side reflectors.

Had it about a year and a half now. Here is what all I've done to it in no particular order: Replaced windshield and seal, all other window seals, sanded surface rust and spray painted primer. Had all seats redone oe style. added new battery and replaced generator with alternator. (Gen still worked, just wanted more power.) Replaced front turn signals with 66 ones and new lenses. replaced plastic shifter bushing (this should be the first thing you do!). replaced rear shifter rod coupling with pretty new red urethane one. sanded and painted oe wheels, found and cleaned up stock oe hub caps.new tires. New light buls and fuses all around. replaced front and rear deck lid seals as well as front and rear turn signal rubber. added super beetle trim in front of doors (just liked the look). found and cleaned oe body trim, added new carpet with padding from the dash to the package tray(big sound difference), redid entire brake system (master cyl, wheel cyls., rubber and hard lines, shoes and hardware, retained oe drums as they are in great shape). Found best way to get to master cyl is to remove the gas tank, good time to clean it out and replace the screen and rubber hose also. new KYB shocks all around. cut out and rewelded (crudely, fist weld job) rear package tray and rear driver side floor section., cleaned up the welds with some aerosol undercoating

and carpet, working so far. new bosch wipers. replaced passenger window scraper (get the good oe style ones if you do this, i got the cheap ones and am not happy, it was a lot of work, for the poor results I got. cleaned up oe rear bumper added t-bars to the front ( front bumber was too far gone to save) replaced bumper bracket rubber front and rear. added front passenger seat belt (p/o had taken it out). added new antenna and driver mirror. only body part replaced was the left rear fender with an oe one. did everything myself except the seats. will maybe paint it one day. Other than that, just driving it when i can.

I have read just like everyone else that you cannot port a single port head out enough to flow as good as a stock dual port. I don't care.

Nice heads. With all that flow, the only thing you are missing is the TURBO

I am going with CB's header for now:

Got the heads on. Waiting on the header.

Heads on, header on, drove it to YU Buggin'. Ran 75 mph all the way there. Sweet. 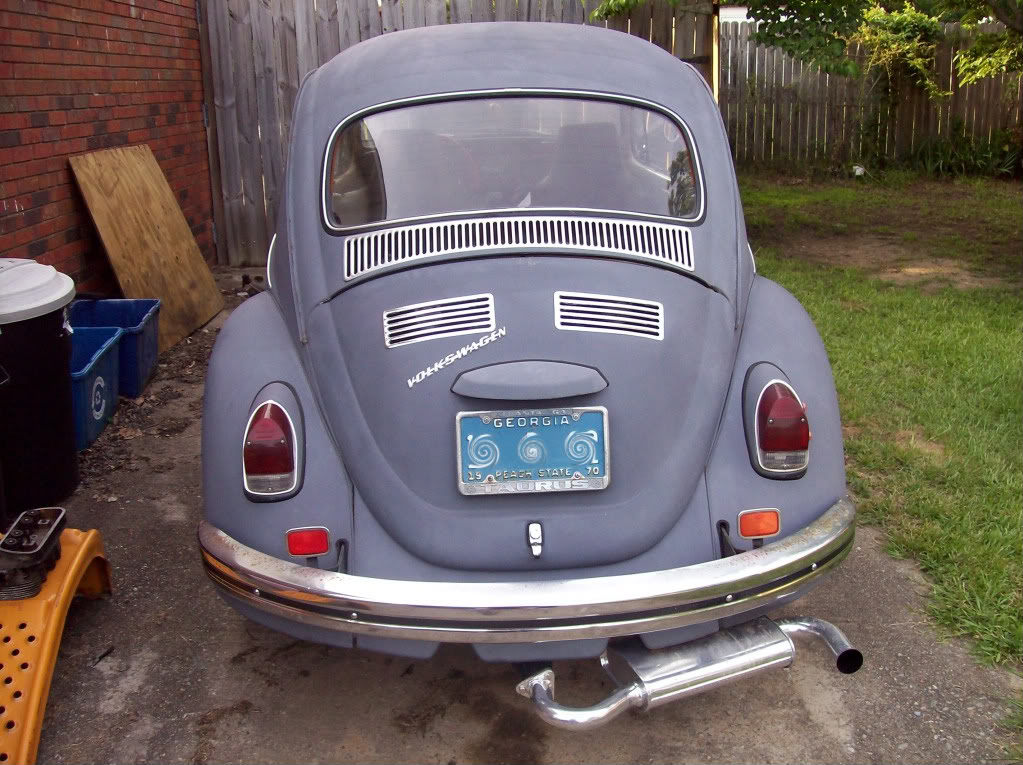 Anyone seen this one around? I wish I would not have sold it. The last time I saw it I think it was painted back the original yellow. It still had the same exhaust set up. The last place it was was near Cordele south of Macon. I would at least like the motor back out of it.

I was trying to think of identifying features on it since the exterior was totally different than when I had it. It had a red 'leather' steering wheel cover on it that uses snaps instead of string. It had a plastic skull head hanging from a "noose" on the mirror. Last picture I saw had it hanging from the dash. All of the new window rubber has the groove for the oe trim. The header is ceramic coated black and the muffler ceramic chrome. It has a 1600 DP now. It had a/c installed at one time and has the holes for the lines drilled under the hood. I put 66 front turn signals on it. I think it is painted Yellow and white now. I know this stuff is pretty vague, just wondering if it is still around.