Yeah- a handy visable spot, and not loose and in the way.

and if you don't want a back seat fire- just toss out the back seat like I did. Problem Solved

(Who really fits back there anymore? My friends don't!)

At one time I worked on Petrolium Equipment, gas dispensers(Gas Pumps). In my Areostar I had a large exstinquisher. It fell over in the back and went off. It was winter and the van filled with the powder and I couldn't breath or see. Not fun when you are in traffic and just slammed on the brakes to miss some stupid ass driver!What a mess...

rpm750 wrote:At one time I worked on Petrolium Equipment, gas dispensers(Gas Pumps). In my Areostar I had a large exstinquisher. It fell over in the back and went off. It was winter and the van filled with the powder and I couldn't breath or see. Not fun when you are in traffic and just slammed on the brakes to miss some stupid ass driver!What a mess... 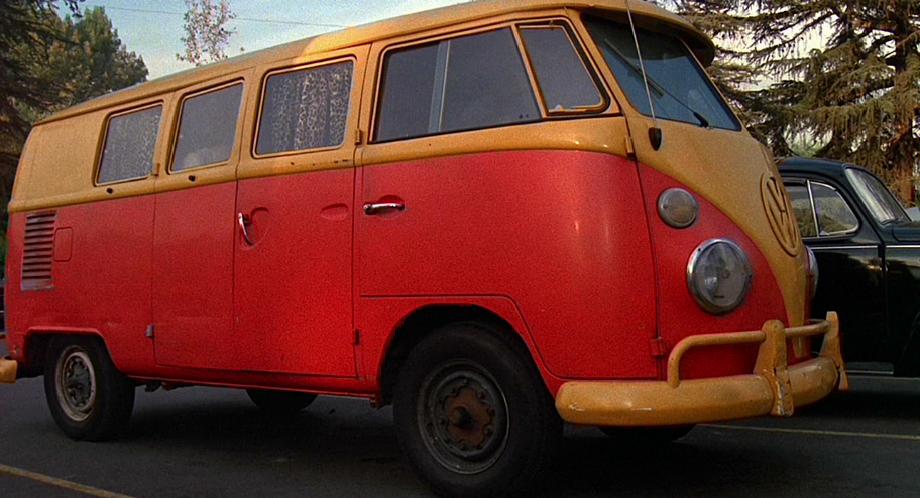 SURE, it was a fire extinguisher...

Is that Spicoli? Sure looks like him, I don't remember that part......

There's a Bug next to the Bus..

New pictures from a nice Saturday drive to Macon for some BBQ.

Did you go to "Sticky Fingers", I've heard good things about them

There's only ONE place for BBQ in Macon... Fincher's BBQ on Houston Avenue. (For those of you "not from around here", the street name is pronounced "how-stun", not "hu-stun".)

The only BBQ in the world to travel into space on the Space Shuttle!
Fincher's BBQ

I like how you are still sporting the upside down 96 rock tag.

atye wrote:There's only ONE place for BBQ in Macon... Fincher's BBQ on Houston Avenue. (For those of you "not from around here", the street name is pronounced "how-stun", not "hu-stun".)

The only BBQ in the world to travel into space on the Space Shuttle!
Fincher's BBQ

Thanks for the heads up, we'll have to check it out

vw57drvr wrote:I like how you are still sporting the upside down 96 rock tag.

Thanks.
I'm bringing it back!

I looked for a tag for a couple of years and finally found an original (sticker on back says 1974) tag in Columbus at an antique mall.

I was in the drive-thru at Chick-Fil-A in Peachtree City and the manager stuck his head out the window and said "Aw, man! I remember those tags! I had one of those when this girl (pointed to a worker) was pooping yellow!"

Well, I had quite a busy and laborious weekend!

I removed and swapped the entire original (and crusty) floorpan and replaced it with the 1972 IRS pan that I have been using under the turquoise '63 for the past few years. The IRS pan already has dropped spindles, front disc brakes, and most importantly: no rust thru! I did this the "harder" way, with the engine installed, because I had plenty of good helpers and honestly, it ended up quicker this way. We just had to lift the rear a little higher to clear the fan shroud, that was all. This is not a job for everyone, but I wanted to show that it IS possible to do in a weekend. Preparation is the key. I already had the new pan ready to go, so there was no work to it, just a swap and hook up the wires, steering, seats, etc.

Here are a few pics of the swap (click for large images):

IRS pan under the car

I had 3 "non-VW" friends help me out and they were amazed at how the cars are put together. While the pan was sitting in the yard, there was a lot of talk about dune buggies all of a sudden...LOL.

So, now I am ready for any cruises, road trips, car shows, or whatever the summer brings! The car rides (and stops!) like a dream compared to what was under it before. I love the gear ratios, too. I wish that I had installed my tach before this so that I could see what the difference in RPM's is, but, oh well, I'm happy!

I am a prop master here in Atlanta, Ga . I am working on a Jack's Hamburgers TV commercial here in Atlanta, they are a chain out of Birmingham, AL. We are shooting the driving shots on July 26 2010, in Covington, GA. Looking for some options to show producer, director for possible picture cars available for rent for 4 to 5 hours on the 26th. Have insurance and a decent budget. Needs to be in good condition, convertible's top is down and interior needs to be in good shape. Car will be driven and placed on trailer of insert car. The commercial shows time progression from a 60's or 70's convertible VW to a new modern convertible VW. Looking for similar color for time transition. Old red to new red, etc. Anybody have either or both vehicles that would be interested in renting? Thanks

Well, I finally figured out my car's hard start problem!

It turns out that the ignition switch was crapped out. It's the one in the locking steering column (that doesn't lock, of course) and I have never worked on one of those before, so I just bypassed it with a stock ignition switch. Works like a champ.

Drove up into the Smokey Mountains this past weekend and the car did wonderful. Had the top down for 3 solid days of driving. The weather was perfect.

Thanks!
It's a lotta fun.

A little update on the 'vert... (Haven't been on here in while very much)

Drove it to Maggie Valley back in June for a few days of driving through the mountains. On the third morning, we were headed to the Great Smokey Mtn Railroad for a train ride followed by a little white-water rafting... We didn't make the train that morning...LOL

I had my usual morning Coca-Cola and got a little choked on it for a second and ended up running off the left side of the road and damn near flipping the car end-over-end. Luckily, we hit the softest patch of tall, thick grass on the whole mountain and didn't go right, which would have been a long ways down. The VW basically ended up standing almost straight up on it's front bumper and when it fell back on it's wheels, the angle of the ditch we were in caused it to gently fall over onto the passenger's side. To tell you how soft the grass was, it didn't break a single headlight globe or foglight and as rusty as the car is, it just pushed the front bumper back into the fenders some. Tore up my 96 Rock tag, though.

Once the car was back on all 4 wheels, it cranked right up and drove fine. The front end needs re-aligning and I had to shim the striker plate on the driver's door (the gap was opened a little). The top was basically as ratty as ever and was mis-aligned a couple of inches, but not damaged overall.

Here are a few pics. We got REALLY lucky this time. I haven't been in any type of real accident in more years than I can remember. Glad that it wasn't worse, which it so easily could have been. I'm looking forward to driving her more in 2012 than I did in 2011, for sure! 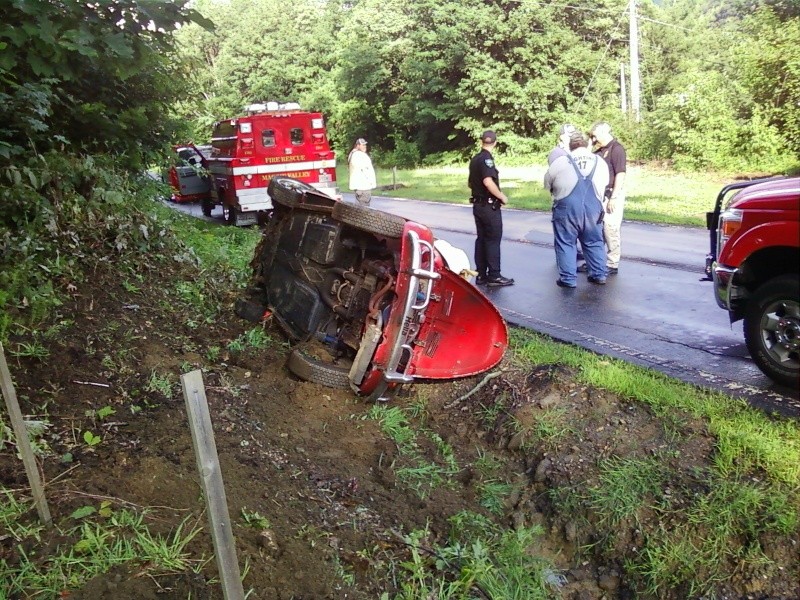 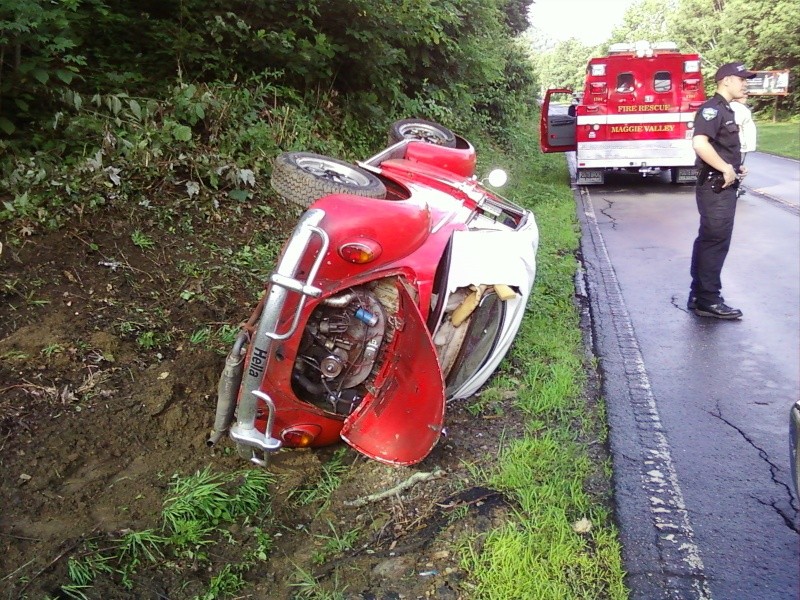 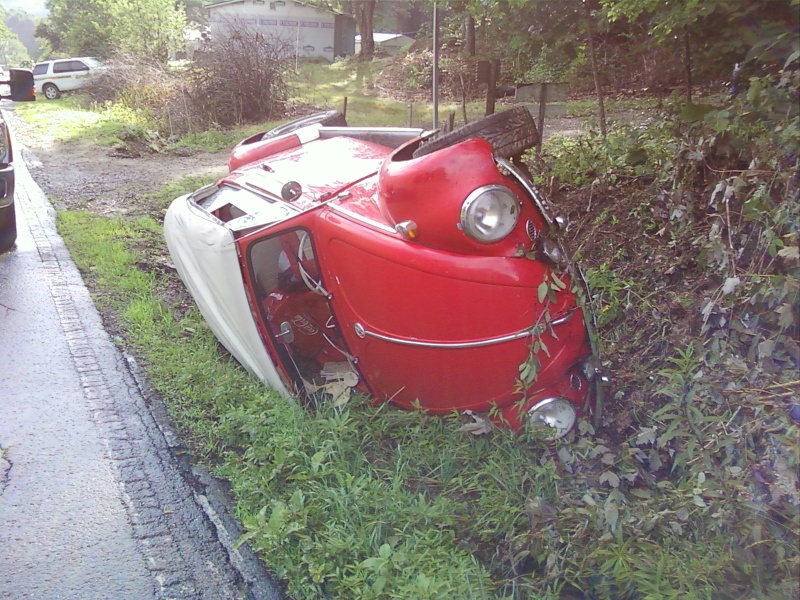 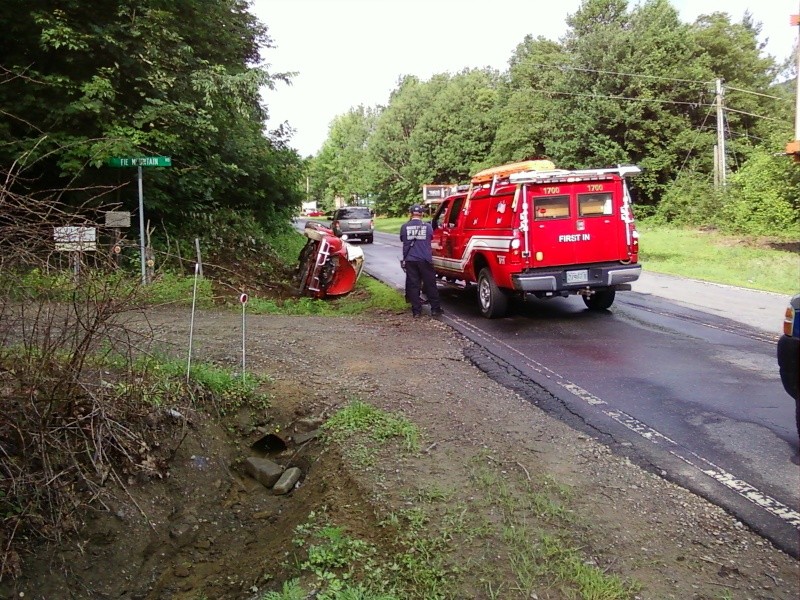 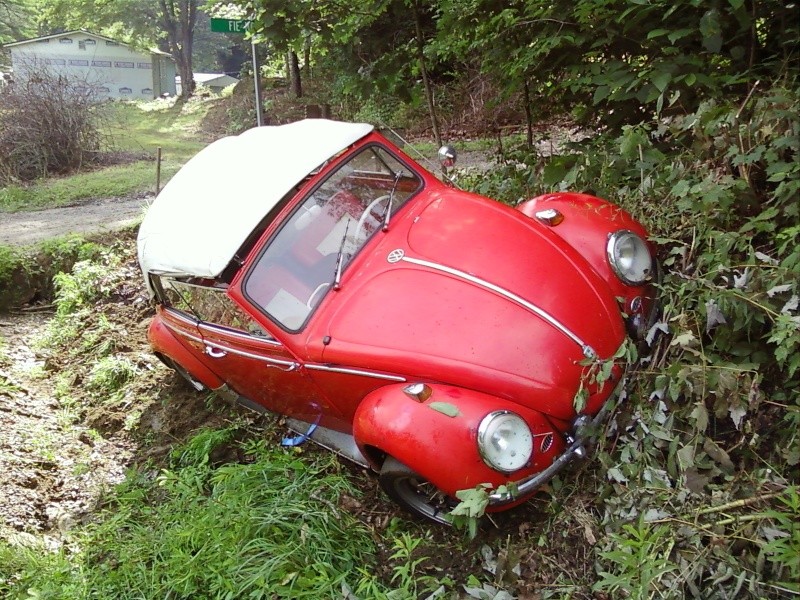 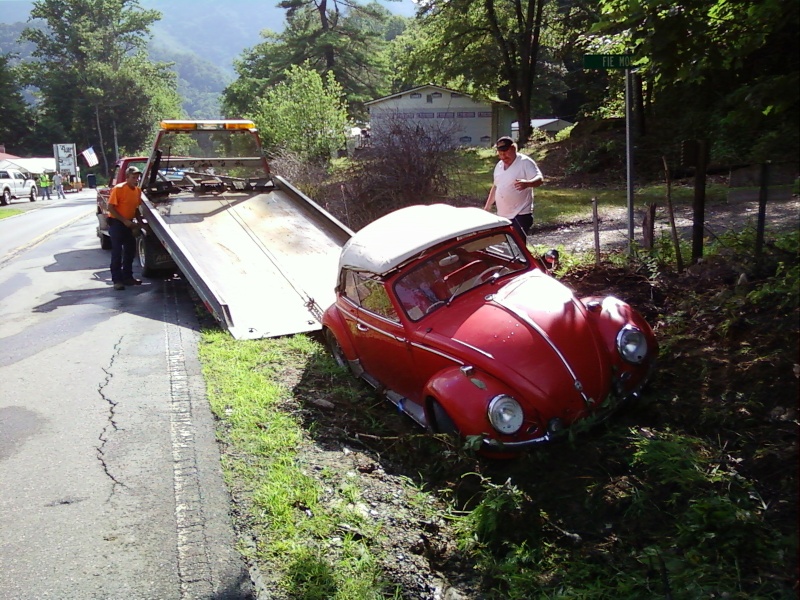 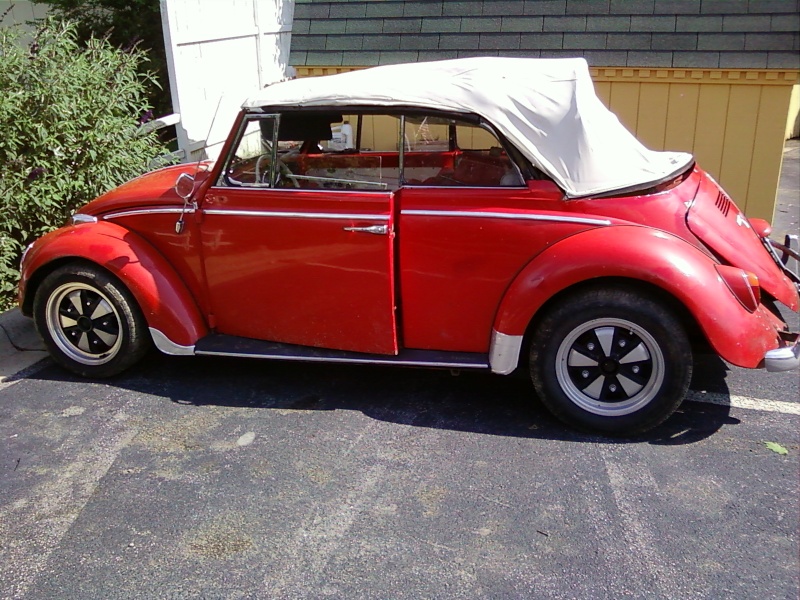 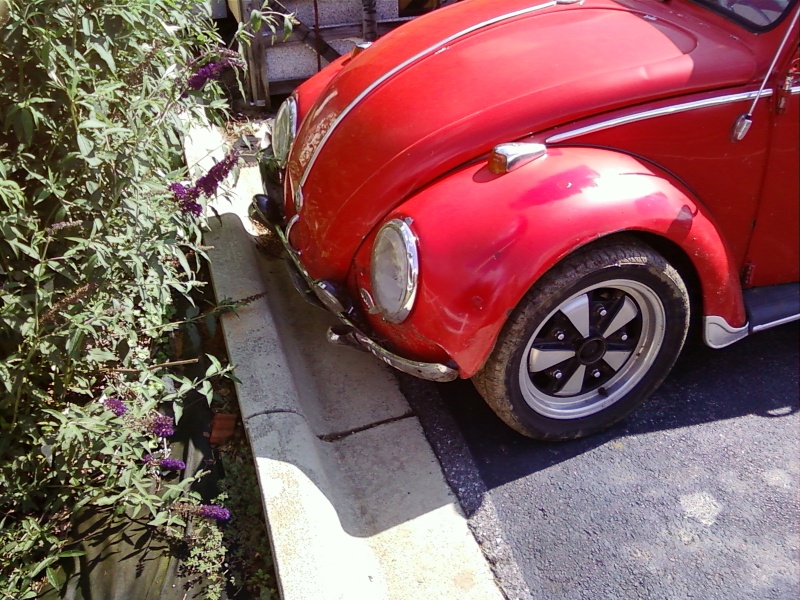 That is amazing that you weren't hurt. Must have been a pretty scary ordeal thhough. Just goes to show you how tuff these little cars are!

Wow, you were really lucky- that could have been a lot worse! Sorry about the 96 Rock tag

Always looking for another, though!

Glad to hear that you guys are ok, you were very lucky things turned out like they did. I guess this is why they say not to drink and drive..........

Ouch! So glad you're okay.

Glad to see you guys are okay. Wow that could have been bad.